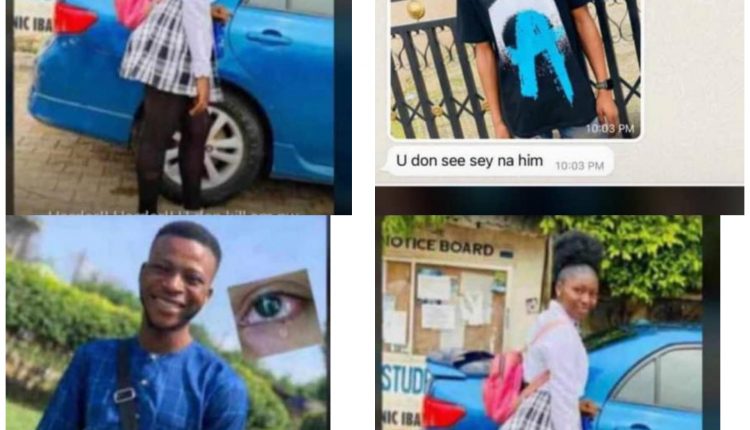 One Dead, Another In Coma as Ibadan Poly Student’s Went on 11-rounds S3x Romp (Photos/Video)

Social Media was set ablaze yesterday Over the sad event that happened in Alaro, reports have it that two Students of the Polytechnic Ibadan went on a sex romp to satisfy their sexual urge, but ended up taking the life of the guy while the lady is reported to be in Coma.

Recall that Akéde Ọ̀yọ́ had earlier reported that the students of the Polytechnic Ibadan had yesterday went on protest that crippled the activities of the institution, forcing the school management to declare an indefinite postponement of their Exam.

Sources who confirm the incident to Akéde Ọ̀yọ́ said the students were seen going home together, on their way home, They were heard discussing loudly what they will do when they got home, “The male student was quoted for saying “he will have multiple rounds of sex ’11rounds”, while the lady nodded in affirmation to have accepted his request.

Sources further confirm that they both went to the girls rented apartment at Alaro, along poly road.

Our source further confirm to us that hours after, friends of the unidentified lady called to reach her on the phone but she was not picking up, after about 2hours, they decided to check on their friend, on getting to her place, they noticed a complete silence after several calls and Attempt to hear from the lady.

They decided to forcefully gain entrance into the room by breaking in, Source said they met the lady in Coma while the boy lifeless body was also lying on the floor, both of them were naked our source added.

“We suspected that they both use drugs before embarking on the act, how can the lady be in coma and the guy already dead without drug enhanced drug”? If truly the eleven rounds they were reported to have Promised each other was carried out, then it means they were both on drug, a student living in that Area who don’t want name mentioned told Akéde Ọ̀yọ́ reporter.

Investigations by Akéde Ọ̀yọ́ reveal that the Boy was a Civil engineering Student of the Polytechnic Ibadan, and was identify as Oromidayo, further investigation revealed that he had just lost a sibling 3days ago, the body of the sibling was supposed to be buried yesterday, Oromidayo could not attend the burial because of the exam which was earlier scheduled to begin on yesterday (Monday), that was later postponed.

The lady who’s name is yet to be identified and was on Coma, when the students break-in to her apartment was rushed to UCH and she’s currently responding to treatment, our source added.

Calls put to the Student Union public Relation Officer was not going through, as the response shows he’s phone was switched off.