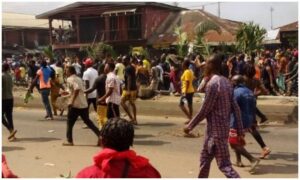 One Killed As Hoodlums Attack Radio Station In Ibadan

One person has been confirmed killed at Moniya area of Ibadan, the Oyo State capital when hoodlums attacked an indigenous language station of Federal Radio Corporation of Nigeria (FRCN) Amuludun FM.

Oyo Police Command explained the deceased was killed during a clash between a local vigilante group and a notorious gang in the area.

It was gathered the deceased, identified simply as Kabaki, was allegedly shot by Amotekun operatives on Saturday morning while intervening to stop the clash.

He was rushed to the hospital but died hours later.

The hoodlums were said to have mobilised to attack the vigilante group’s office located in the same premises with Amuludun FM during which they vandalised vehicles belonging to the radio station and its staff.

Some windows were also shattered during the attack.

The incident created tension in the area given its proximity to Sasa market where ethnic clash led to the death of some people in February.

The market was burnt down by angry traders.

Oyo Police spokesman Adewale Osifeso, in a statement, said: “Sequel to the face-off between members of Soludero, a local vigilante group and some criminal elements around Sasa Area, Ojoo, Akinyele LGA of Oyo State while on routine patrol, yesterday Saturday 31st July 2021, at about 4:00 am during which one Kabati, male, a member of the criminal gang sustained gunshot injuries and was confirmed dead at the hospital.

“Consequent upon this, the hoodlums in their numbers stormed the Soludero presumed office, located at the premises of the Federal Radio Coporation of Nigeria, Amuludun 99.1 FM, Moniya Ibadan in a bid to launch a reprisal attack.

“Preliminary investigation gathered from an on the spot assessment shows that, upon the arrival of the hoodlums, they became agitated as none of their targets was on sight.

“Consequently, windscreens/glasses of four vehicles parked in the premises were broken along with the glass door at the entrance of the Media outfit, inferring that the attack was not targeted directly at the media outfit but members of the vigilante group.”

While assuring the public the perpetrators of the attack would be tracked down, the command emphasised the importance of immediately reporting similar incidents to the police for immediate intervention.

One Dead As Hoodlums, Vigilante Group Clash In Shasha, Ibadan