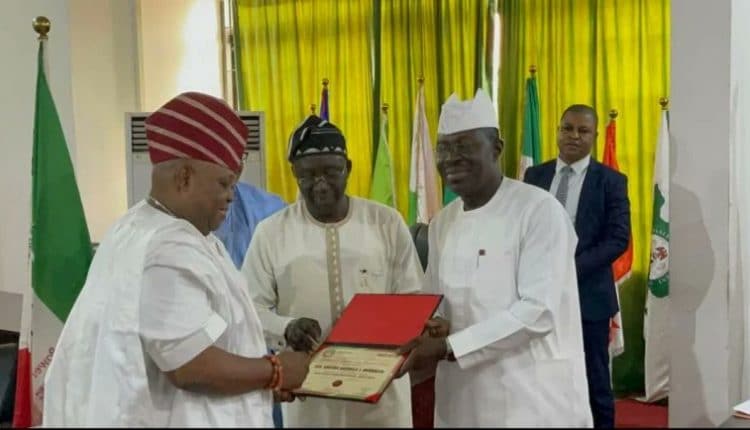 The Peoples Democratic Party has presented the Certificate of Return to the winner of the Osun Primary elections, Senator Ademola Adeleke.

The presentation took place at the National Executive Council Hall of the party’s national secretariat, Wadata Plaza, Abuja on Thursday.

This is as the PDP’s National Working Committee shunned Dotun Babayemi who also emerged as a governorship candidate in one of the parallel primaries held in the state.

A faction of the party led by Mr. Sunday Bisi held its governorship primary at Osogbo City Stadium, while Wale Ojo-led faction held another primary at WOCDIF Centre, Osogbo.

Announcing the result of the primary held at Osogbo City Stadium, the Deputy Governor of Bayelsa State, Senator Lawrence Ewurujakpo, who was the chairman of the governorship primary, said Adeleke garnered 1, 887 votes to emerge victorious, while Fatai Akinbade, Akin Ogunbiyi and Babayemi recorded no vote. Mr. Sanya Ominrin got four votes.

At another primary held at WOCDIF Centre, Osogbo, the returning officer, Adelani Ajanaku, said accredited voters were 1,907, while 27 votes were voided.

The two factions had initially disagreed on the list of delegates that would be used for the exercise.

Speaking after the exercise, Babayemi had described his emergence as a challenge to turn around the state for the betterment of its people.

He said, “I see my emergence today as a great challenge, a clarion call to a divine assignment to bring to bear, the vision of our founding fathers.

“This, I promise, shall be pursued with every fibre of our being. This is because Osun, which is our common heritage, has suffered enough degradation in the hands of interlopers.”

Adeleke, in his acceptance speech, called on the party to unite ahead of the governorship poll, adding that with cooperation, the PDP would defeat the ruling party at the poll.

He said, “No victor, no vanquished. We are all winners. Let us work together to rescue people of Osun State from the current APC government.

“The good people of Osun State have suffered enough under the current APC government.”

JUST IN: Makinde Presents Staff Of Office To New Olubadan Of Ibadanland