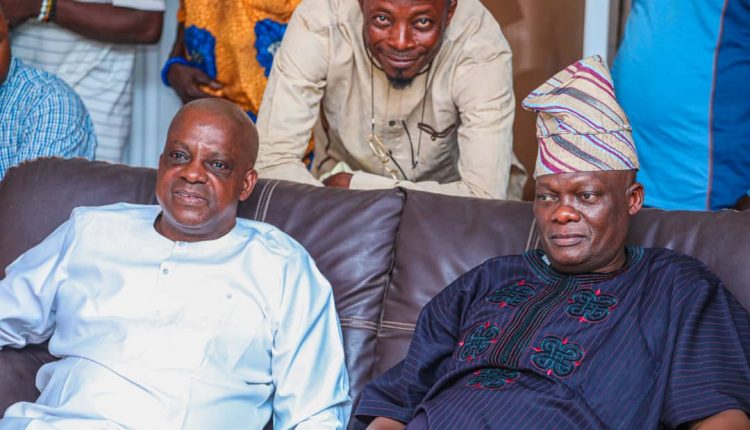 The APC chieftains in a brief chat with journalists on Tuesday night disclaimed a news report that their followers are kicking against impending defection of the former special adviser to governor Seyi Makinde on Local Government and Chieftaincy Matters to the progressive family.

According to GOAL POACHER NEWS, loyalists of Hon. Akintola and Hon Murphy said Aderibigbe is not welcomed to the party, saying that the party structure in Akinyele would not be surrendered to him. They added that Aderibigbe would need to take the back seat going into the 2023 elections.

Hon. Murphy, however, discountenanced the report, saying APC is anxiously waiting for the official defection of former executive chairman of Akinyele LGA.

“Hon. Aderibigbe is a brother and great politician. Every serious political party will want someone like him in its fold. Hon. Aderibigbe’s eventual defection will make APC in Akinyele LGA stronger and also enhance our electoral chance in 2023. No one is a threat to one another. Hon. Akintola, Hon. Aderibigbe and I have won elections in Akinyele LGA. Therefore, our coming together on the same political platform will definitely be a nightmare for Governor Seyi Makinde-led PDP government” Hon. Murphy said.

The former lawmaker lauded Senator Folarin for all his spirited efforts to unite and fortify the APC ahead of 2023 general elections in Oyo State.

Aderibigbe was the candidate of the African Democratic Congress, ADC, in the 2019 national assembly election in Akinyele/Lagelu Federal Constituency.

From Panel Beater, To Tanker Driver… — The Interesting Story Of Gastab CEO