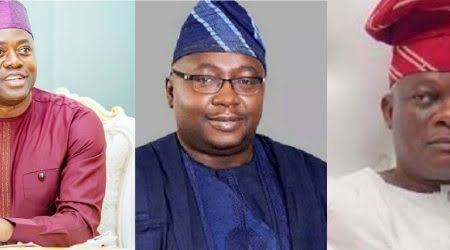 Oyo 2023: We’ve Not Supported Any, From The Trio Of Makinde, Folarin Nor Adelabu As Our Candidate — Oyo NURTW

Oyo State chapter of the National Union of Road Transport Workers led by Abideen Olajide, popularly known as Ejiogbe, has debunked claims that it had officially declared support for the Accord gubernatorial candidate, Adebayo Adelabu also known as Penkelemesi.

In a statement made available to newsmen in Ibadan on Wednesday, the union described the news as fake and misleading.

Earlier today, a group identified as Adelabu mandate media group had circulated on social media that one Alhaji Nasiru Odeyemi Asanke led the Road Transport Workers of Oyo State to throw their weight of support behind Adelabu as the union’s candidate.

The statement partly read: “Since our union was proscribed, we have distanced ourselves from politics and politicians. Based on this, we are using this medium to inform the general public and members of NURTW, to disregard the news because is a fake news. We also want bloggers to stop misleading members of the public.

“Truly, Adebayo Adelabu of Accord Party invited us for a meeting and we honoured his invitation but that doesn’t mean we have agreed to drum support for him.

“As a reputable Union in Oyo State, anyone can invite us for a meeting, even if Governor ‘Seyi Makinde or Senator Teslim Kolawole Folarin invite us, we shall honour their invitations because we are their friends not enemies,” the group stated.

In the meantime, the group has also noted that its constitution grants it the right to support any politician or political party.

“But it’s not yet time to declare support for any politician and any political party,” the statement clarified.

JUST IN: JAMB Releases Results Of 2022 Mop-up UTME (SEE HOW TO CHECK RESULT)