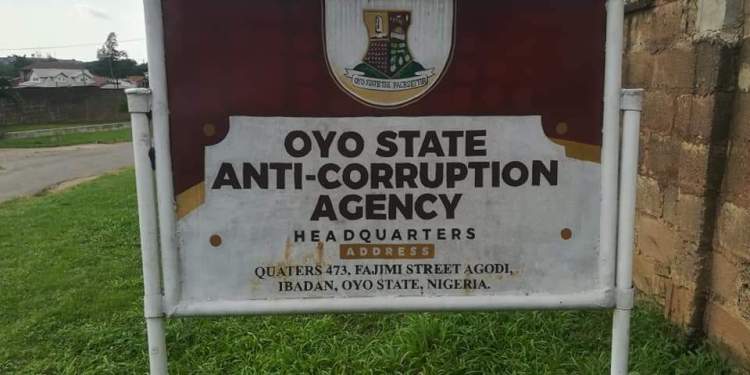 Five staffers of a local government area in Oyo State have been arrested and are currently being investigated over allegations bothering on land racketeering and diversion of government funds into private accounts.

The identities of the officials and their local government area in the State were not disclosed as at the time of going to Press.

According to a statement issued by the Oyo State Anti-Corruption Agency (OYACA) and signed by the Chairman, Honorable Justice Eni Esan on Thursday, investigations were still ongoing to unravel the matter and ensure appropriate legal actions are taken against the suspects if found guilty.

“The Oyo State Anti-Corruption Agency (OYACA), in carrying out its statutory mandate, has nabbed five officials of a local government area in Ibadan, Oyo State, on allegations of land racketeering and diversion of government funds into private accounts.

“Investigation is still ongoing to unravel the matter and ensure that the appropriate legal actions are taken,” the statement showed.

The agency has recently announced that the people of Oyo State should avail themselves the opportunity of the offices of the agency at Agodi in Ibadan and in all the 33 local government areas in the State to submit petitions against individuals, offices and organizations believed to have committed fraud against the State or the people.

It has commenced therefore commenced opening of local government offices to make the submission of letters or petitions easy for the people.

Ooni Has a Picture He Projects To The World, Another One Which Is His True Self – Estranged Wife, Naomi Silekunola