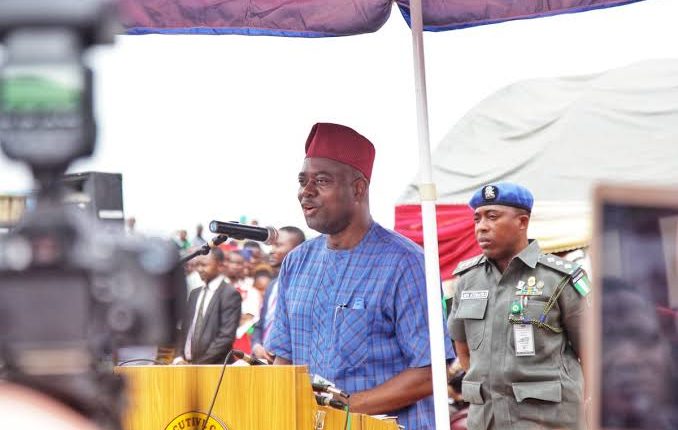 The Oyo State governor, Engr. Seyi Makinde had indicated that the law that established the State Anti-Corruption Agency (OYACA) was in consistency with the federal laws that gave birth to the Independent Corrupt Practices and other Related Offenses (ICPC) and other federal agencies established to fight graft.

The governor stated this on Tuesday while declaring open the ‘Organizational Integrity Management Training Programme for the OYACA board members, management and staff at the Premier Hotel, Ibadan.

The training was as a result of collaboration between Oyo State Anti-Corruption Agency (OYACA) and the Independent Corrupt Practices and other Related Offenses (ICPC).

Makinde, who was represented at the event by the State Attorney-General and Commissioner for Justice, Prof. Oyelowo Oyewo, said no provision in the OYACA laws would go against the dictates of the federal laws, as the case between the Ondo State and the Attorney-General of the Federation was the watershed for the creation of the State anti-corruption laws.

He hinted that OYACA became imperative because many cases were brought in the open when the present administration came on board and personnel of the State were required to make court appearances at Abuja and other parts of the country, which he said was expensive and the fight had to be domesticated because corruption has become endemic in the society.

Gov. Makinde therefore called for the passage of the whistle-blower laws by the House of Assembly, which he said would make investigation and prosecution of cases of corruption speedy and seamless.

“The constitutional competence of the State to fight corruption rested squarely in the provision of the law and there exists no provision in OYACA laws that tie the hands of any federal anti-corruption agency.

“OYACA law is consistent with the fundamental objectives of the federal laws, which are instruments created to fight graft and block loopholes where public resources are stolen or mismanaged.

“We appreciate the ICPC for this collaboration to stem the tide of graft in our society and cause a lot of loss to the government and the people of the State, there is also the urgent need to pass the whistle-blower bill into law to aid the speed and smoothness of investigation and prosecution .”

The Chairman, Independent Corrupt Practices and other Related Offenses (ICPC), Prof. Bolaji Owasanoye said the judgement of the Supreme Court on Ondo State and the Attorney-General of the Federation has affirmed the power of ICPC to investigate and prosecute acts of corruption and State governments in Nigeria were not excluded from doing same, if the provisions in their anti-corruption laws do not negate that of the federal laws.

He charged the OYACA to be resolute in advancing the course of fighting graft and mismanagement of public resources, saying the work is tough and there would be many enemies against the agency.

“Corruption is so systemic and endemic that I am persuaded that it is pertinent that States can also work in fighting this scourge, the need for fight to end corruption cannot be over-emphasized because corruption is debilitating to the progress and advancement of the State and Nigeria as a whole.

“This work is a tough nut to crack, you are not going to have many friends, but what do you care, if your interest is to serve the State and the people?’’ he asked.

The Chairman, OYACA, Hon. Justice Eni Esan in her welcome address appreciated the extension of hands of support from the Anti-corruption Academy of Nigeria (ACAN), a sub-agency under the ICPC, located at Keffi, Nasarawa State.

She exuded joy at the collaboration, geared towards training board members and staffers of the agency and urged the trainees to make good use of the content of the workshop in order to enhance capacity of the personnel.

She appreciated Governor Seyi Makinde for reposing huge confidence in the agency and board members to win the fight against corruption in Oyo State.

Apart from the ICPC Chairman, Prof. Boloaji Owasanoye who spoke on the topic ‘Leading with Integrity to Achieve a Corrupt-Free Agency’, other facilitators include Prof. Sola Akinrinade, who spoke on ‘Building Stakeholder Support for Anti-Corruption and Partnering with other ACAs’.

Also present at the workshop were top management members of Oyo State Ministry of Justice and OYACA, led by the Secretary of the board, Alhaji Ibrahim Oyemonla Tijani.

Oyo State Anti-corruption Agency (OYACA) board was inaugurated on the 24th of December, 2020 by Governor Seyi Makinde with the mandate for members to work towards putting a stop to acts of misuse of public resources through investigation of cases of corruption and eventual prosecution.