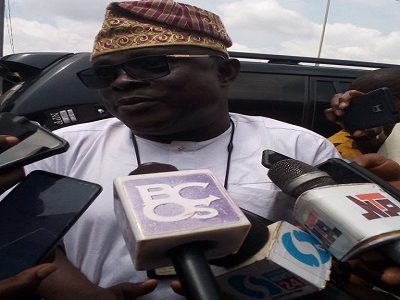 Gambo Lawan, chairman of the congress of the All Progressives Congress, APC, in Oyo State, was held hostage by hoodlums suspected to have been sponsored by some aggrieved members of the party.

OYOINSIGHT.COM learnt that Gambo was lodged at one of the accommodation facilities around Jericho.

As early as 7 am, the hoodlums had blocked the major entrances leading to the facility, calling the chairman unprintable names.

They said he was not going to leave unless he announced cancellation of the planned congress.

Effort by Adebayo Alao-Akala, former governor and leader of the party to get Gambo released was abortive as security men said the mood was not too safe to move.

It took the intervention of the combined team of the Nigeria Police Force, Nigeria Security and Civil Defence Corps, NSCDC, and Department of State Security Service before they could be released around 7 pm.

OYOINSIGHT.COM understands that trouble had started late Friday night when the outgone chairman of the party, Akin Oke, alleged that the delegate list has been falsified. This was just as Oke asked members to converge at the party’s secretariat Saturday morning to take a decision.

But unknown to the aggrieved, four of the members of the committee, including Abdullah Bello, its secretary, had all left the facility in the morning. They later agreed that the secretary should go ahead to conduct the congress. It ended in affirmation.

Some of the aggrieved however claimed that only the secretary unilaterally conducted the congress and that four members of the committee had arrived Abuja as at 5:31 pm, a claim OYOINSIGHT.COM cannot confirm as at press time.

Gambo, who confirmed the ugly incident to Fresh 105.9 FM, said it was unfortunate that party chieftains can sponsor hoodlums to delay the exercise, adding that a new leadership has emerged in Oyo APC.

”Ours is to monitor the process by way of observation. The party had written us that this is the venue of its congress. We have no information of a parallel congress,” he added.