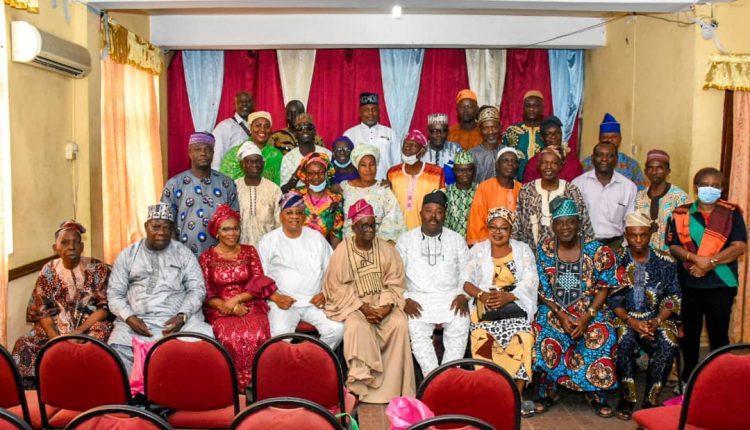 As the All Progressives Congress nationally continues to welcome political heavyweights into her fold, the Ìbàdàn North unit has also in recent months welcomed former and new members into the party at the local government level.

Ìbàdàn North party leaders, in joint effort with Hon. Olaide Akínrẹ̀mí (Jagaban) has been making various moves to ensure the party attracts more members across all wards as the APC in general prepares towards the 2023 elections.

Today’s meeting was the first official sitting between the Ìbàdàn North APC and defecting Ìbàdàn North ZLP under the leadership of Barr Sharafadeen Alli, as plans for a grand welcoming is in motion, and that is set to take place soon.

Chief Sharafadeen Alli who is from Ward 3 in Ìbàdàn North appreciated the leaders present and encouraged unity among the rank and file of the Ìbàdàn North All Progressives Congress in ensuring the party’s progress and victory in the next general elections.

Ìbàdàn North Federal Rep, Prince Olaide Akínrẹ̀mí who was unavoidably absent sent his goodwill message which was delivered by Alhaji Shina Alabi, as he promised to continue giving all round support to all causes that ensure the progress of the APC in Ìbàdàn North, Ọ̀yọ́ State and Nigeria.

Hon. Jagaban stated that he is deeply elated by the decision of Barr Sharafadeen Alli and the Ìbàdàn North ZLP in joining the APC, reaffirming the Governor Mai Mala Buni led National Caretaker Committee’s untiring effort in uniting the party and in encouraging other parties to join the APC.

Hon. Olaide Akínrẹ̀mí further stated that the guidance, advice and encouragement given by Asiwaju Bola Ahmed Tinubu to the National Caretaker Committee, stakeholders and party faithfuls especially in the South-West has been instrumental to the ongoing reconciliatory success achieved so far.

Deliberations from leaders present focused on how to further solidify the APC in Ìbàdàn North Local Government, and how to foster genuine reconciliation and repositioning of the party in line with the agenda of the National Caretaker and Extra-Ordinary Convention Planning Committee of the APC on which Hon. Olaide Akínrẹ̀mí currently serves as a member.

‘We Must Choose An Integrated Approach To Governance’ ― Makinde