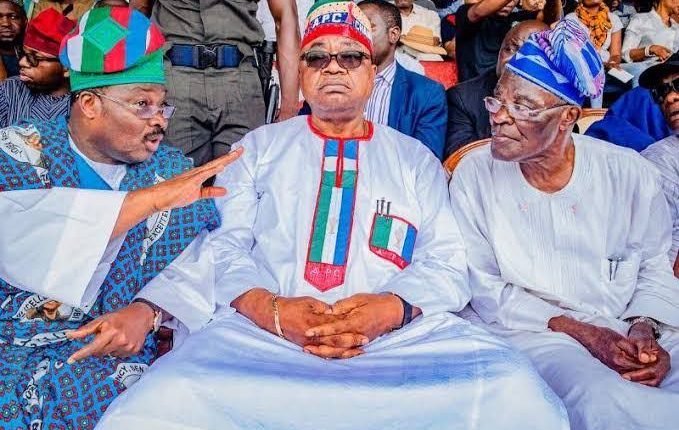 I have been silent for quite sometime because, Senator Abiola Ajimobi has told me that, for the next election, coming up in 2023, he will not pick any candidate for any position (may his soul rest in peace).

The late governor equally said everybody will go for primary elections, who ever wins the primary will be the candidate of the party.

Quite frankly, the party is dangerously moving in the the direction of factionalisation.

Currently, the obvious factions are ‘Akala’ and ‘Oke’ .

His Excellency, Governor Adebayo Alao-Akala, is the defacto leader of the party in Oyo-State.

For two main reasons, the first is that, he deferred to late Governor Ajimobi when he was alive and accepted to be the second in command, been the only two people who had ever been governor of the state in the party. With the exit of Senator Ajimobi, the mantle of leadership automatically falls on Governor Akala.

His leadership position was tactly challenged , when some people decided some months ago, that they can’t hold meetings in his house, hence Governor Kayode Fayemi’s intervention. Meeting at Fayemi’s house in Ibadan has come and gone. No reference was made to Fayemi’s meeting again and Governor Akala has since rise up to his responsibility as the defacto leader. It was on the basis of that, that he was nominated by late Governor Ajimobi as the Chairman of Elders committee, to reconcile everybody back into the party, especially, the ‘Unity Forum’- the job, he performed excellently well.

On the part of Baba Akin Oke, I know him to be a contented man and a very good administrator of men and resources. It is on record that the outgoing Chairman of the All Progressives Congress (APC) in Oyo State, ‘Baba Oke’ had a good relationship with Governor Ajimobi and if he had reasons to disagree with any position with him, he will come to him and behind closed doors, they discussed and iron out any differences among them.

Baba Oke coordinated the party issues excellently well. If he had wanted to retain party position, most people would acceded to the request; at least before the crisis. Nonetheless, he has agreed to leave. He wanted to ensure his successor comes through transparent means, fair play and justice. Obviously, he wanted the Congress of 30th October, until he realised that the list given to him has been adulterated, which was also confirmed at Abuja, National Office and he cried foul. Hence his opposition to the Congress (my own opinion).

Nonetheless, some groups of APC went ahead with the Congress and other groups abstained, believing if the list given by Abuja representative is corrupt the outcome will be corrupt. If other members have stayed in the Congress, matters would have been resolved there – a lesson for the future.

However, the State Exco of the party will be resolved one way or the other, either by Team A or Team B.

Obviously, the disagreement, emanated from presumed calculation of the Gubernatorial aspirants.

It is natural for gladiators to strategize and permutate.

Is it certain that the presumed leading group will ultimately pick the gubernatorial ticket?

The answer is not certain!

Power lies with the people. The answer would have been YES for ‘Indirect Primary’, where you votes for the candidates by the delegates. However, with direct primaries any candidate can win.

The tickets will be determined by the people. For gubernatorial candidate, members of the party from 351 wards of the state are expected to determine the next Oyo APC governorship nominee.

The table can tilt or turn in any direction. The first now may still come first or last. All depends on party members in each ward and local government and the commitment of the gladiators.

The saving grace is that there is little or no skirmishes at the ward levels of the party.

The work to do by all intending candidate is at that level.

Politicking involves compromise and understanding. The current imbroglio has come and it will go. “The scrotum of ram may shake but it wouldn’t cut”

APC First. Like the slogan one of the young men in the party that I have respect for, Damola.

The party tickets lie with the party members emanating from the grass roots.

People struggle for power. it is not served a lacarte.

OYO101: In Oyo APC, It Is Progressives Vs Conservatives | Muftau Gbadegesin