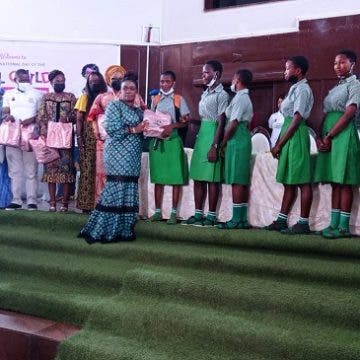 The wife of the Oyo State governor, Mrs Tamunominini Makinde, has tasked students and teachers of secondary schools on digital literacy.

Makinde gave this charge at an event held at the State Secretariat, Ibadan, in commemoration of this year’s International Day of the Girl Child, themed, “Digital Generation, Our Generation.”

Addressing the audience, Makinde stressed that acquisition of both digital literacy and Information Technology skills had become more imperative, more than ever, for individuals to remain relevant and enhance their future.

Noting that the emphasis over time has been on the students, Makinde said it was crucial for teachers to also equip themselves technologically so as to be on the same page with today’s tech-savvy students.

She, especially, enjoined female students to take seriously science, technology, engineering and mathematics (STEM) and rubbish notions that STEM courses were more of the jurisdiction of male students.

Stressing that everything today is a product of technology, she urged the female students to take a keener interest in Information Technology (IT).

She prayed that more females get involved in the coding and development of computer programs.

Rather than negativities, Makinde urged students to rather explore the Internet to choose their career paths, network mentors, acquire and share ideas that will positively impact the world.

She stressed that students should reap the benefits of ever-changing technological innovations and not expose themselves to cyberbullying.

Various other speakers at the event to include a Cloud Infrastructure Engineer, Mrs Kafilat, Sokunbi and another expert, Mrs Aderonke Adedayo emphasized the need to optimize technology as a tool for social change and development.

In his own remarks, state Commissioner for Education, Science and Technology, Mr Abiodun Abdu-Raheem emphasized that technological knowledge, especially by girls, was crucial to the development of Nigeria and Africa, at large.

He decried the high prejudice against women and unequal opportunity to education, saying that the state government was keen on ensuring that the voice of the girl child is not muffled.

Abdu-Raheem said the state Ministry of Education into its curriculum, at all levels, digital and technology education since 2012.
FG’s Desperate Moves To Nail Igboho By Bisi Oladele

Man has learnt to conceal ignoble motives, at least to maintain decorum and keep societal standards. But acting based on wrong motives is least expected from those in positions of leadership or authority who hold power in trust for the people. It is especially so because people look up to them, not only to maintain standards, but to set new ones that will further instil sanity and boost the pride and confidence of members of the society, group or family in them.

Yet, this expectation has not been met in the way the federal government is desperately pulling every available string together to weave a web of criminality around the embattled Yoruba Nation agitator, Chief Sunday Adeyemo (aka Sunday Igboho) in order to justify its plan to kill or incarcerate him, as established by the court.

Igboho came to national limelight on January 7 this year when he carried out his threat to evict the Seriki Fulani of Igangan, Soliu Abdulkadir, against all odds. Igangan, an agrarian community, perches on the northern part of Ibarapa land in Oyo State. It borders Republic of Benin.

His celebrated visit followed a previous one two weeks earlier during which he ordered Abdulkadir to leave the town or face eviction by him. His decision was rooted in personal confirmation that the Fulani leader was allegedly fronting for kidnappers and armed robbers in addition to shielding his kinsmen from facing the consequences of deliberately grazing their cattle on farms.

Cases of murder and kidnapping for ransom in the entire Ibarapa land reached a crescendo late last year. And about 85 per cent of the cases were allegedly traced to some criminal Fulani elements in the area. Residents of the entire area, which covers three local governments, began to live in fear while visitors and business people stayed away for fear of being kidnapped or murdered. The murder of a leading light in the town, Dr Fatai Aborode, late last year was the last straw for the criminals.

Abdulkadir relocated from the town on hearing that Igboho and his aides were on their way to Igangan on the fateful day. But as the activist landed in the community against warning by the government, irate youths seized the moment to also torch the Fulani leader’s palace ostensibly to prevent him from returning. Igboho will later transform his project to an agitation for Yoruba Nation, lending his voice to the allegation that the Buhari-led federal government was tactically supporting the excesses of the Fulani across Nigeria. He took his campaign to some other southwest states, drumming support for the self-determination of the Yoruba.

The crude response of the federal government to Igboho’s project came in the wee hours of July 1 when operatives of the Department of State Security (DSS) invaded his Soka, Ibadan house. They shot their way through, killing two persons, vandalizing his property and seized some items which they took to their headquarters in Abuja. Luckily for Igboho, he escaped. He later escaped to Republic of Benin where he was arrested on July 18. He is still being held by the country’s authorities just as the Nigerian government is apparently still fishing for grounds to extradite him to face trumped-up charges.

In the meantime, Igboho sought justice in court, and got it!

As affirmed by Justice Ladiran Akintola of Oyo State High Court in his judgment in Igboho’s case, the DSS and its Oyo State director rather “justified the ‘invasion’ (of Igboho’s house) on the basis of their claim to investigating or following up on an intelligence which is at best a suspicion. Yet, suspicion, no matter how strong, cannot take the place of legal proof in law. Nobody gets convicted or punished on the basis of suspicion simpliciter. What the 2nd and 3rd respondents (DSS and its state director) have done in the instant case has been to condemn the applicant without trial based on mere suspicion,” he held.

The judge further affirmed Igboho’s right to agitate for self-determination by upholding his lawyer’s argument that the July 1 invasion was “actuated by their desire to stop the applicant from going round the South-western part of Nigeria and peacefully campaign at rallies attended by millions of indigenous Yoruba people for self-determination.”

He emphasized: “The action of the 2nd and 3rd respondents in trying to arrest and intimidate the applicant on account of the cause of defending Yoruba interests in their quest for self-determination amounts to a violation of the right of the applicant to propagate the ideas of Yoruba self-determination which right is protected by Article 20 (1) of the African Chatter Human and Peoples Rights (Ratification and Enforcement) Act and Articles 3&4 of the United Nations Declaration on the Rights of Indigenous People.”

As if the July 1 illegal invasion was not bad enough, President Buhari further revealed his administration’s desperate moves over Igboho when he specifically mentioned his name in his Independence Day national broadcast on October 1 as among the few citizens being sponsored to destabilize Nigeria. He grouped him with the leader of the proscribed Independent People of Biafra (IPOB) Nnamdi Kanu, whose organization has been fingered in a series of violent activities unlike Igboho whose agitation was peaceful.

To further nail its motive for wanting Igboho dead as argued by his lead counsel Chief Yomi Alliyu (SAN) in the hearing of the originating motion at the Oyo State High Court, the Attorney General and Minister of Justice Abubakar Malami (SAN) also ingeniously linked the embattled activist with terrorists funding in a press conference on October 22. It was a failed attempt as the evidence adduced to support the claim stood logic in the head.

The three moves have confirmed that the federal government is only interested in nailing Igboho at all costs while turning deaf ears to the cries of the people of Igangan and other parts of the country where criminal herders are killing, maiming and kidnapping innocent Nigerians. Though Igboho’s decision to evict Abdulkadir was illegal, it should also be seen as a reaction of a people whose only saving grace from their ‘terrorists‘ was self-help as government refused to protect them.

Instead of concentrating efforts on educating herders on the need to live peacefully with their hosts, encourage them to embrace ranching and bring criminals to justice, the federal government keeps proving that the freedom of criminal herders to kill, kidnap and graze on the livelihoods of farmers is far more important to it. A sight of some photographs showing the gruesome butchering of lgangan people, including children and women, when the aggrieved criminals invaded Igangan in the night of June 5 was a further confirmation of the heartless and vicious manner in which the locals have been terrorized in their own land.

It is high time President Buhari served justice to all Nigerians so he can earn the trust of all citizens again. Nailing Sunday Igboho and others who are exercising their fundamental rights peacefully at all costs, I believe, will only aggravate the agitation for self-determination.

Restructuring of Nigeria is essential for its social, political and economic survival. There is need to devolve more power to federating units, embrace fiscal federalism, promote inclusiveness and serve justice to all citizens accordingly. A better Nigeria guarantees peace and prosperity for all citizens and residents alike. Until we deliberately do these as a nation, anger and mutual suspicion will keep growing, threatening our peaceful coexistence and killing patriotism in citizens. Now is the time to bring the necessary change.