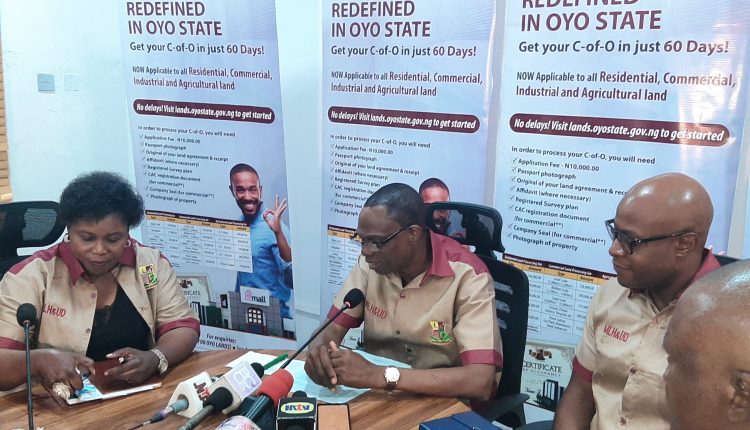 Oyo State Government, on Tuesday, launched a new Certificate of Occupancy Scheme tagged ‘Redefined C-of-O’ to make the plan more accessible and affordable to all land users in the state.

He maintained that between 2020 and now, a total number of 6,779 Certificate of Occupancy (C of O) applications was received under the Home Owner’s Charter (HOC) scheme apart from Conventional C of O, saying that 4,804 of the applications have been processed and issued with certificates.

He hinted that prospective applicants are expected to produce the following documents: Application Form at N10,000.00, Passport Photograph (1), original Land Agreement, registered Survey Plan verified by Surveyor General office(N5,000.00,) Certificate of Incorporation of the company (if Commercial), Photograph of the subject property (if developed).

“In 2020, the State Government through the Ministry of Lands, Housing & Urban Development launched the Oyo Home Owner’s Charter (OYHOC) scheme which served as an opportunity for Prospective Home Owners to obtain their Certificate of Occupancy at an affordable price.

“The C of O Redefined will give opportunity for industrial landowners, residential, commercial, and agricultural landowners to apply and have their Certificate of Occupancy (C of O) within 60 days and at an affordable price.

“His Excellency has approved the following fees under this new scheme and it is our sincere hope that members of the public will make use of this opportunity.

“Between 2020 and now, a total number of 6,779 Certificate of Occupancy (C of O) applications was received under the HOC scheme apart from Conventional C of O and 4,804 of these applications have been processed and issued with certificates, this is an appreciable increase to Certificate of Occupancy issued during the last administration. With C of O Redefined, we hope to achieve more than we have done with OYHOC.

“The Ministry is aware that some property owners who applied for C of O are yet to be issued the same, this is due to several reasons but majorly it borders on coordinate errors and survey issues which the ministry is looking at resolving.

“In order to apply for C of O Redefined, property owners should produce the following documents: Application Form at N10,000.00; Passport Photograph (1), original Land Agreement, registered Survey Plan verified by Surveyor General office N5,000.00, Certificate of Incorporation of the company (if Commercial), Photograph of the subject property (if developed).”

“It is important to state that some properties that fall within Government Acquisition, stream set back, Circular Road, High Tension Cable, Rail Line Corridors, etc are not entitled to Certificate of Occupancy and as such are not going to be issued with any.

“However, applications will commence tomorrow, June 1, 2022. We are calling on all property owners to seize this opportunity and enjoy all the benefits of C of Redefined. Please apply at Room 4, Ministry of Lands, Housing and Urban Development. We have also enabled our C of O applications online where applications can be made through www. lands.oyostate.gov.ng OR call 070069652637 for further inquiries.

Similarly, the commissioner explained that the state government has introduced the Land Swap System by creating five new GRAs at the following locations; Ibadan, Oyo, Ogbomoso, and Saki, adding that the arrangements to complete the infrastructures within these GRAs have been put in place.

He appealed to members of the public to pay up their Land Use Charge, and also warned them to desist from patronizing touts, third-party agents but walk straight into the Ministry for necessary inquiries and make payment at designated banks or through channels specified by the Ministry.

Earlier, the Permanent Secretary, Mrs. Mofoluke Adebiyi, said that the Oyo State government is interested in ensuring that land administration is made and to make service gets to all and sundry in the state.

“I would want to recall that in the year 2020, the state government launched the C of O scheme that stands even till today the 31st day of May 2022.

“This was specific to residential buildings in Oyo State. Now, what is the essence of having this kind of scheme? We all know the importance of having a document to support whatever landed property you have.

“Apart from the fact that this goes to the database of the government, it is your way to lay claim to that which belongs to you knowing full well that, in Oyo State, the land is our major source of income and there are so many issues surrounding the administration of land. So, that is why it is always important that you have your own documents.

“Apart from this, there have been other benefits to you having your documents. In the last 24 months, we have done this scheme for residential areas but now we are extending it to other areas.

Eruobodo Denies Leaving APC With Adelabu, Say’s He Will Be The Last Person Dump APC