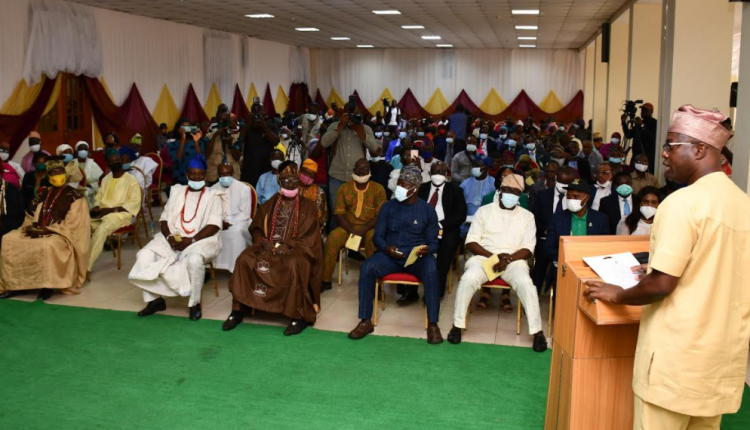 The Oyo State government has procured 1,194 metric tonnes of aluminium sulfate at the cost of N400million to boost production of portable water in the State.

This was disclosed by the State governor at the second stakeholders engagement on the 2022 budget, organized by the Ministry of Budget and Economic Planning on Friday at Akinyele Local government award hall in Ibadan.

Governor Abiodun Seyi Makinde who was represented by the Secretary to the State government, Mrs Olubamiwo Adeosun in his keynote address, promised the people of the State that he would not renege on his promise to carry out the will of the people for a better society.

He highlighted some major projects that have been approved based on the will of the good people, ranging from construction of two-bay permanent fire stations at Atiba and Ibarapa Central local government areas, Oyo-Iseyin road reconstruction, the Light Up Oyo project amongst others, adding that N400 million was spent on the purchase of 1,194 metric tonnes of aluminium sulfate to boost the production of potable water in the State.

The governor enjoined the people of the State to speak out their minds on what they want from the current administration, so as to include them in the 2022 budget, as the administration has this has become the policy guide of the government.

“The stakeholder engagement is to gather the array of needs of the people and make them the programmes of government, like we have always been saying, this is a people-centered administration that is focused on making policies, programmes and activities that are driven by the needs of the people.

“We are communicating directly with the people that put us in power to drive governance and we must do it according to their wish and aspiration, the projects highlighted are in accordance with the demands made by the people and in relation to the available resources, we will continue to do this and we have seen that it is the best form of communicating with the people.”

In her welcome address, the Permanent Secretary, Ministry of Budget and Physical Planning, Mrs. Mofoluke Adebiyi made it known to the good people that the current administration open government’s initiative was aimed at strengthening civic voices and demonstration of responsive government system in order to promote the interest of all citizens, explaining further that the last two years witnessed a tremendous change in the inclusion and participation of citizens in budget development and implementation .

Meanwhile, representatives from different local government areas at the event appreciated what they called the good work of the current administration, while they expressed their demands, especially in the areas of road construction, rehabilitation of more moribund companies, improvement of health facilities, improvement of agricultural growth and rehabilitation of security posts.

Dignitaries at the meeting include market men and women, artizans, traditional rulers, youths representatives, non-governmental organizations, civil societies, among others.

JUST IN: Makinde To Commission Ultra-modern Adamasingba Stadium In September