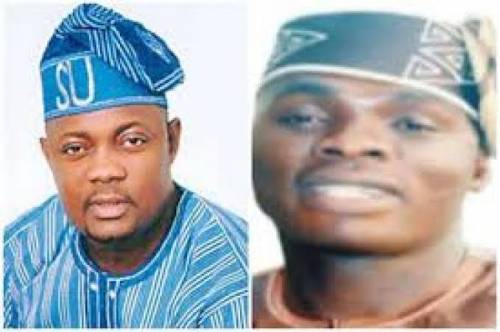 Oyo Group Kicks As Alleged Killer Of House Of Reps Member, Sugar Declares To Run In 2023

Following the declaration of one Olafisoye Akinmoyede, one of the alleged killers of a lawmaker that represented Lagelu/ Akinyele federal constituency in Oyo State between 2015 and 2019, Temitope Olatoye popularly called Sugar, a group under the umbrella of Lagelu Legacy Youth Movement has kicked against the move.

The group challenged the Oyo State chapter of the All Progressives Congress (APC) to present a credible candidate with a good antecedent for 2023 elections.

He was allegedly involved in the killing of Temitope Sugar.

Olafisoye was arrested as the prime suspect in the murder of Olatoye Sugar in 2019 but discharged and acquitted by the Oyo State High Court for lack of merit in the suit.

The chairman of group, Dauda Adebakin, gave the warning about fielding Olafisoye in a statement in Ibadan, on Wednesday.

The statement reads, “Our group, Legacy Youth Movement, is a non-political group, but part of our aims and objectives is to advocate for good governance and a change of leadership that will enhance the quality of life of Oyo State residents.

“We need to articulate our thought and minds to ensure that only credible and qualified candidates are elected into political offices comes 2023.

“Our attention has been drawn to a statement credited to present House of representatives member, representing Lagelu, Akinyele federal constituency, Hon. George Oluokun, where he said he has no intention to contest in 2023 election to return as lawmaker to the green chamber in Abuja, this gave people of Lagelu, Akinyele federal constituency a big relief as we were given a life line and opportunity to shuffle for a credible lawmaker who will perform to expectation and redeem the lost glory of the constituency.

“But in dismay we heard that Olafisoye Akinmoyede has expressed willingness to take up a challenge for the vacant seat. At this juncture, if APC dares the needed peace of Lagelu, Akinyele and makes Akinmoyede smell the party ticket, then it will appear to the people of Oyo State connected to history that Oyo APC is connected to criminality, in which the good people of Lagelu Akinyele federal constituency would vehemently reject at the poll.”