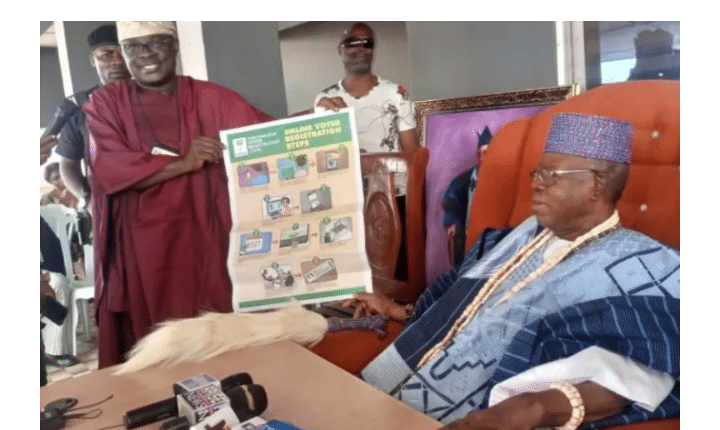 In preparation for 2023 general elections, the Independent National Electoral Commission (INEC), Oyo State chapter, has voiced concerns over the refusal of the electorates in Oyo state, to collect over 700,000 Permanent Voters’ Cards (PVC).

The State Resident Electoral Commissioner (REC), Barrister Mutiu Agboke, stated this during a courtesy call on the Olubadan of Ibadanland, Oba Lekan Balogun at his Alarere residence on Wednesday.

The Oyo REC declared that non-collection of PVCs would inevitably disenfranchise the electorates from participating in the 2023 general elections.

As a result, Agboke sought the monarch’s and other relevant stakeholders’ help, in raising awareness of the necessity for PVC collection, among Oyo state people.

He claimed that the quantity of PVCs that are yet to be collected, is sufficient to elect a governor.

Agboke pointed out that the two governorship candidates who received the most votes in the 2019 gubernatorial election, did not receive a total of 700, 000 votes.

The goal of the visit he said, was to congratulate Oba Balogun on attaining the throne of his forebears and to seek his support and collaboration as a respected voice in the community, on the importance of citizens participating actively in political activities.

Aside from the non-collection of PVCs by the residents as earlier noted, the REC also related with the monarch to help appeal to the various political parties to play the game according to the rules of engagement saying that, “INEC is doing everything possible to ensure hitch-free elections, but we need the cooperation of the political parties by adhering to the rules put in place.

without hiccups of any form, but we can only achieve this with the support and cooperation of all the stakeholders which form part of our visit here, Kabiyesi,” the REC stated.

Barr. Agboke also informed Oba Balogun that the commission would begin the fourth phase of the Continuous Voter Registration (CVR) on next Monday, while urging the monarch to encourage residents to participate in the exercise.

Responding, Olubadan assured the REC of the palace’s support for the commission’s programmes and advocated for adequate public education, asking the commission to be aware of the people’s degree of political knowledge.

“There’s nothing remarkable about the so-called sophisticated societies that makes them better than we blacks except that they do participate in electoral activities.

“Let’s fully participate in all the pre-electoral activities and vote peacefully during elections. Let us collaborate with ourselves since INEC is ready. As citizens too, we should be ready. I appeal to all to let’s see to the greatness of this country by doing things rightly,” Olubadan added.

Meanwhile, Oba Balogun has appealed to both politicians and electorates, to work towards making Nigeria great by following the political principles.