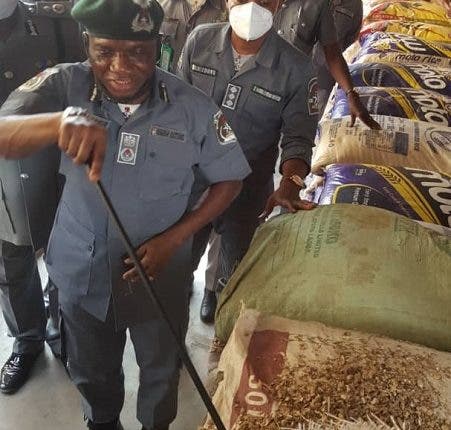 The Comptroller in charge of the Oyo/Osun Area Command of the Nigeria Customs Service, Adamu Abdulkadir, has said that the command, between January and October 2021, generated the sum of N50,980.1 billion as revenue, signifying a 14.4 percent increase.

Speaking at a press briefing held at the command headquarters in Ibadan on Thursday, Abdulkadir also disclosed the seizure of 500 bags of foreign parboiled rice in a residential building in Osun state.

Abdulkadir said that the comptroller general also boosted the morale of officers with the provision of other necessary facilities and equipment that could aid their performances.

“All these have further re-awakened the vigour and strategies in our anti-smuggling drive, as exemplified in the seizure of 500 bags of foreign parboiled rice made in a residential building in Osun state by my gallant officers in the early hours of this morning,” Abdulkadir said.

The comptroller also spoke on seizures made within the same period, with a cumulative Duty Paid Value (DPV) of N617,051,012 million.

The seizures included 5,046 pieces of 50kg bags of foreign parboiled rice, 22 bales of used clothing, a 2017 Honda Accord car, a 2020 Toyota Prado SUV and 500 pieces of 25-litre kegs of Premium Motor Spirit (PMS), popularly known as petrol, which he said would be auctioned due to its inflammable nature, with the proceed remitted accordingly.

He promised that officers of the area command would not relent on their efforts in combating the menace of smuggling.

“Rather, we shall further sharpen our intelligence and widen our dragnet to ensure that all nooks and crannies of Oyo and Osun states are well covered,” he said.

He advised the people of the states to keep off engaging in mob attacks on officers while performing their lawful duties, warning that there were sanctions prescribed against such offenders under Sections 11 and 165 of the Customs and Excise Management Act (CEMA) Cap C45 LFN 2004.

“For those of you that block the roads and other access points, thereby preventing our officers from accessing smuggling areas, all in the name of vigilante, kindly refrain from such act, as you are also punishable under Section 11 of the CEMA Cap C45 LFN 2004.

“You should be informed that Section 158 of the CEMA, gives customs officers the power to patrol freely across the nation,” the Comptroller stated.

He said that the efforts of the Comptroller General had prompted more commitment and focus owed his management team and Nigeria at large in fighting the menace of smuggling that had bedevilled the nation, saying that it would breathe a relief on the economy and, by extension, the livelihood of the populace.

Coalition Members Weren’t Patient With Makinde, Reasons For The Fallout—Oloko