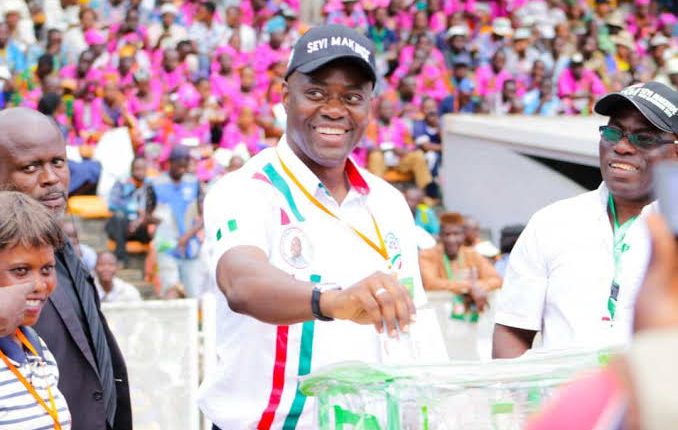 Oyo PDP Crisis Not Enough To Defect, And If I Want To Join APC, Nobody Can Stop Me — Olopoeyan

Adebisi AbdulRasheed, a leader of Peoples Democratic Party, PDP in Oyo State, Alhaji Abdul-Rasheed Adebisi Olopoeyan has said that members of the executives of his party are suffering and smiling, despite being in power in the state.

Olopoeyan, as he is popularly, called, spoke with journalists over the weekend during the occasion of his 60th birthday.

Saying that he regrets working for the emergence of Seyi Makinde as PDP candidate and governor, Olopoeyan said he has no reason to consult anybody if he wants to defect to the All Progressives Congress, APC.

This was just as he added that nobody can also stop him from dumping PDP if he so wishes.

He said that he could join APC as it is a notable party with influential people but he has no substantial reasons that can make him dump PDP which he said he has been pitching tent with over the years to another party.

The internal wranglings in the PDP are not sufficient enough to warrant his defection to APC or other party, adding that crises are normal in politics and that is why the stakeholders are not relenting in solving the crises.

He said he has firm belief and assurance in Senator Bukola Saraki-led national reconciliation and strategy committee to put things in order in the pacesetter PDP but that Governor Seyi Makinde may possibly thwart their efforts because of the previous exercises which ended in futility.

Olopoeyan said Makinde was the architect of crises within the party and the wranglings may be over anytime soon if the governor is ready for true and genuine reconciliation.

”He needs to go through the normal processes and procedures before his public contest at the national convention where the accredited delegates will decide who will lead the party.”

On alleged statement credited to Ambassador Taofeek Arapaja, the Southwest chairman of PDP, that those who are aggrieved in the party are paperweight politicians and stakeholders who are seeking favour from Uche Secondus, Olopoeyan responded that the former deputy governor is a newcomer who has not known the pedigree and political influence of the referred stakeholders.

He equally described Arapaja as someone who talks and addresses issues with no substantial facts, adding that “he is someone who is acting the script of Makinde,” whom he alleged of using the platform of PDP in 2019 eventually turning himself to semi-god who dictates who gets what in the party.

He said late Lamidi Ariyibi Adedibu remains his mentor even after his death because he had simple and dynamic mechanism of resolving crises within the party and most importantly on the role he took in 2003/2004 political tussle of Oyo State.

Olopoeyan, however, said that he regrets the annulment of June 12, 1993 that almost ended his life and also the energy he dissipated to enthronement of Seyi Makinde in 2019 general elections.