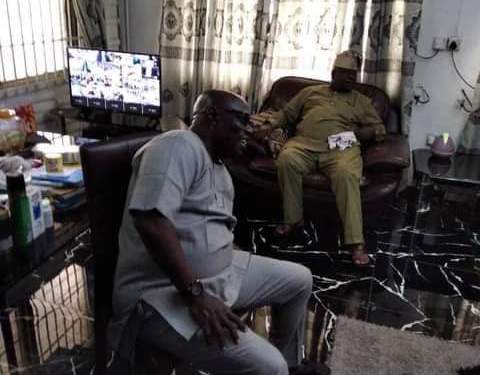 A Chieftain of the Oyo People Democratic party, Alhaji Abdulrasheed Adebisi Olopoeyan has accused Gov. Makinde for neglecting party members who made frantic efforts to ensure he coast home in victory.

Olopoeyan who stated this during the visit of Oyo PDP Reconciliatory Committee to his Bashorun residence on Wednesday lamented how the Gov. Makinde who made frequently visit to his house during the electioneering has suddenly dispatched and neglected him by not engaging him in the State’s Affairs, nor offer to him any appointment to compensate him for his assiduous efforts during the electioneering.

The Saka Balogun-led Reconciliatory Committee was set up to reconcile all aggrieved members of the party who felt their interest is not well captured in the government visited his Bashorun residence to discuss the way forward with him.

Other members of the committee who accompanied Dr. Balogun on the visit were the State Chairman of the party, wife of former governor of Oyo State, Alhaja Mutiat Ladoja, Statw Secretary of the party – Hon. Wasiu Adeleke, Mr Layi Baale from Ibarapa zone of the party and Chief Jacob Adetoro from Igbeti in Oke-Ogun area of Oyo State.

Dr. Balogun, while speaking with the Nigeria Tribune shortly after the meeting said: “We are here today to talk with one of our leaders who feels offended and cheated. We have told him that this committee is here to gather all the information needed and make recommedations to right the wrongs.”

He further stated, “Let me also state that Alhaji Olopoeyan has told us that he is still an integral part of the party. I want the general public to ignore the rumours that he is leaving the PDP. He is still strongly with the party, an insider for that matter and he remains a leader of PDP in Oyo State.

“We have also assured him that we would talk to the governor and make sure that there is equity and fairness in the way things would be done as far as governance by the PDP in Oyo state is concerned.”

Also speaking, Alhaji Adebisi Olopoeyan said: “We started the new PDP in the state together but, ever since the emergence of the new adminitration in the state, there has been nothing to show for our efforts particularly myself. What I told the committee was that if I am not going to be compensated for my efforts, they should not in anyway go after me.

“This is because, ever since I have been raising issues about the neglect, I have been seeing traces that some people are actually after me”.

“The committee led by Dr. Saka Balogun, was here to ask whether I have resolved to leave the party and I told them that I have not decided to leave and that as a matter of fact, nobody can ask me to leave”

“One of the major reasons is that, I was the one who solely made the move to revive the party after the 2015 general elections when most of the members angrily left the party. And members of the committee actually acknowledged that fact” he concluded