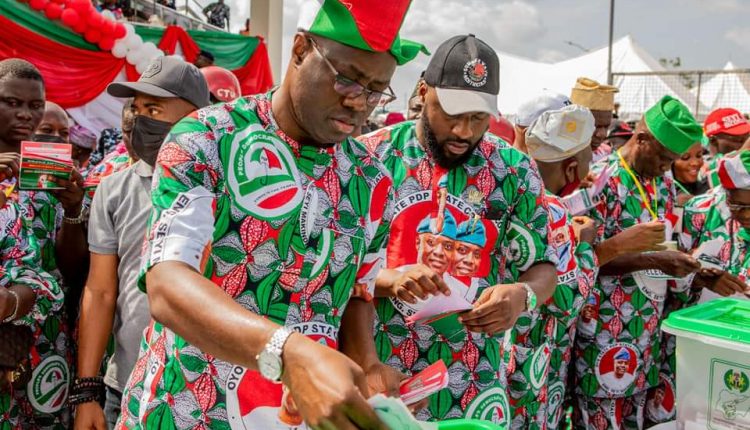 The Oyo State Chapter of the People’s Democratic Party, PDP, has produced two chairmen following the conduct of two parallel congresses held on Saturday in Ibadan.

One of the exercises, held at the Lekan Salami Stadium, Adamasingba, Ibadan, was attended by Governor Seyi Makinde and the Congress Committee members, while the other event was held at the Jogor Event Center, Ibadan, by some aggrieved members of the party.

At the two congresses, security agencies were, expectedly, fully in attendance to ensure the safety of lives and property and there were elections for the contestants, despite the fact that the consensus method was adopted.

At the Lekan Salami Stadium, Dayo Ogungbenro emerged as the State Chairman of the party in the congress monitored by Governor Ifeanyi Ugwuanyi of Enugu State, who was the Congress Committee Chairman.

While delivering his acceptance speech, Ogungbenro, who spoke on behalf of the other newly elected executive members of the party, promised that the exco would work together with the state government to ensure the progress and improvement of the party and the Seyi Makinde-led administration.

In his address, Governor Seyi Makinde congratulated the newly sworn-in executive members of the party and called for the unity of the party, saying the aggrieved members must return to the party because the PDP in Oyo State is one.

At the Jogor congress, held by the aggrieved members of the party, a former member of the Oyo State House of Assembly, Michael Okunlade, emerged as Chairman

In his acceptance speech, Okunlade promised to pacify all members and work towards the development of the party, calling on all parties faithful to support the new executive so as to take over the state’s administration come 2023.

Electoral violence
At the congress held at Jogor, not less than 50 vehicles parked around the venue were vandalised by hoodlums.

The hoodlums, who came in their scores with sticks and cutlasses, were, however, prevented from entering the venue of the congress by security operatives.