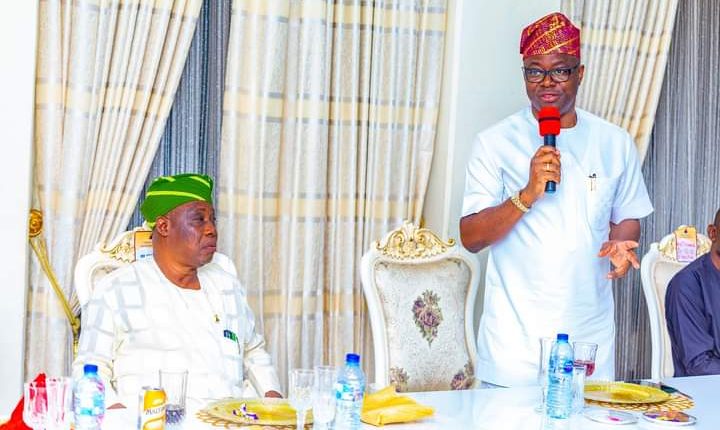 Oyo PDP Praises Makinde’s Leadership Qualities, Say’s “He Has Shown Democratic Principle’s By Handing Over To His Deputy Before Vacation”

The ruling party described the governor’s action as not just merely complying with the provisions of section 190(1) of the 1999 constitution as amended but portraying how things should ordinarily work in a democratic setting.

The Publicity Secretary of the ruling PDP in Oyo state, Akeem Olatunji in a press statement made available to newsmen on Monday afternoon (today) said, “just like the late Obafemi Awolowo, Oyo state and by extension Nigeria may not be able to fully appreciate how governor Makinde has continued to deepen the nation’s democratic institutions by such conducts.”

The party explained that until Makinde did the unexpected by formally writing the Oyo state House of Assembly to handover power to his deputy, it was almost unheard of among Nigerian governors trusting their deputies enough to do so despite the provisions of the constitution.

“It is noteworthy and very commendable to give kudos to a great but very humble man as Governor Seyi Makinde who is truly our Mr ‘talk and do’ and by that we mean he acts more than talking and when he does give you his words, you can surely take his words to the bank.

“This is one of the ways of showing exemplary leadership which practically deepens our democratic institutions because we may complain about the inadequacies of the constitution till eternity but if people in government are not faithful and sincere to comply with the little correct constitutional provisions then they can not comply with a more robust constitution.

“So, apart from all round development of critical infrastructures, building our economy and continually improving Oyo State security architecture, building our political and democratic institutions are vital areas the Governor is really doing fantastically well and that is why this unprecedented action by Governor Makinde means a lot not to us alone in Oyo state but to the whole nation.

“This is real democracy playing out under the leadership of Governor Makinde and we urge others in power even outside of Oyo state to emulate this act as it will further help create political stability even in the absence of the Governor who so trusts his deputy to now act as Governor for the period of vacation.” Oyo PDP said.

Meanwhile the party has also commended the Acting Governor, Barrister Bayo Lawal for the way and manner he has carried on with the affairs of the state in the absence of Governor Makinde since the commencement of his Leave which started August 11.

The ruling party maintained that Makinde was absolutely right in his choice of the former Attorney-general of Oyo state stressing that the party will continue to provide all the needed support for the Acting Governor. “Barrister Bayo Lawal has shown the capacity and ability expected in conduct and character of someone occupying such exalted office.