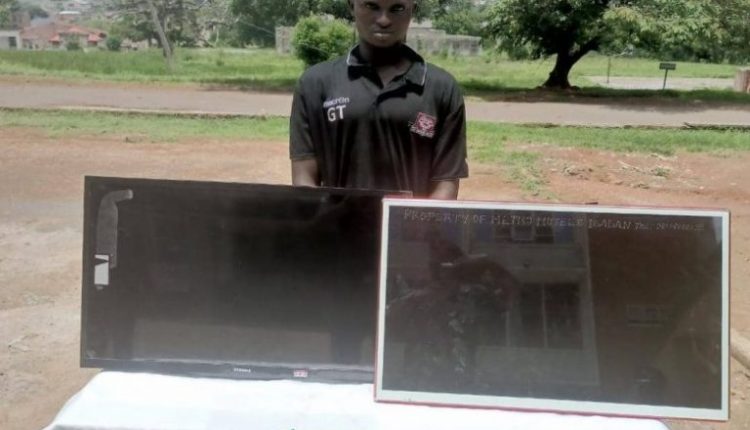 A 23-year-old serial burglar stealing from hotels and other recreational facilities, Bankole Mustapha has been arrested by the operatives of the Oyo Police Command attached to Bodija-Housing Divisional Police Headquarters.

The operatives made the arrest while on an intelligence led surveillance activities around Bodija/Sango axis of Ibadan North Local Government area, on Monday 25/04/2022 around 0100hrs.

The surveillance was in a bid to rid Oyo state, off unscrupulous and undesirable criminally motivated individuals.

A statement by police spokesman, Adewale Osifeso said preliminary investigations revealed that the suspect approached the hotel’s receptionist during the late hours of Sunday, under the guise of being a lodger having devised sinister means of executing his plan of removing valuables from the hotel, by demanding a room in proximity with the hotel’s exit point.

“In furtherance to his actions, at about 0100hrs he removed and carted away the 32 Inches Samsung Television in his room and another unbranded 32 Inches flat screen television at the reception when no one was within sight.

“He has since been arrested with the items valued at about #120,000 (One hundred and twenty thousand naira only) and has confessed to committing the crime.

“Efforts are in top gear to crackdown the rest of his criminal network. More updates regarding the investigation would be provided accordingly, please”, the statement read.

“The NPF rescue me app is also available for free download on both Android and Apple IOS, for Android and iPhone users respectively,” the statement added.