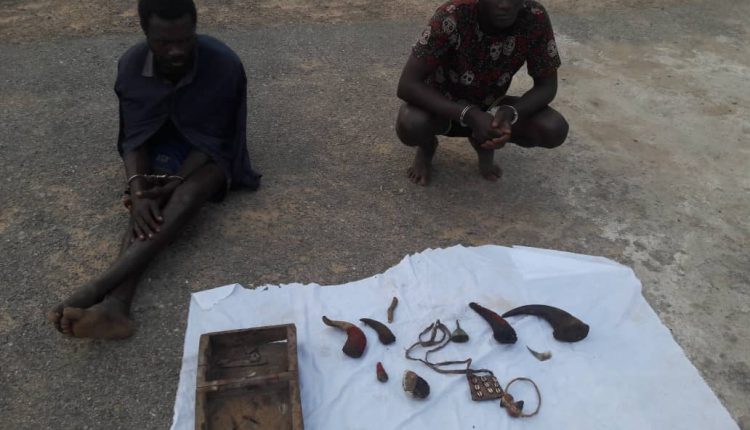 The Oyo State Police Command has recorded another feat in it’s efforts to improve security for lives and properties of all residents in the state by apprehending two murder suspects in Ayekale area of Saki.

The Oyo State Commissioner of Police, CP Ngozi Onadeko who made this disclosure in a press statement signed by the State Police Public Relation Officer (PPRO) DSP Adewale Osifeso, and made available to Newsmen on Wednesday evening of October 27 said the Police will continue to flush out all criminal elements from the state.

According to the Police boss, there is no more hiding place for criminal and unscrupulous elements hibernating anywhere in the state stressing that the state command is already partnering with sister security agencies and other local vigilante groups to ensure that every residents in the state sleep with their two eyes close at all times.

The Oyo state Police according to the press statement said that the arrest of the two murder suspects, one 29 years old Ismaila Wasiu and 35 years old Mutairu Shittu who are both of Ayekale area of Saki was a huge success to the Police efforts and big relief to residents of Ayekale community.

Recalls that the State Police Command recently nabbed some armed robbers terrorizing some parts of Oluyole Local Government after distress call was put to the Police authority in Oluyole Division.

The state police command which said it acted based on credible and timely intelligence said it’s preliminary investigation revealed that the victim was lured from Lagos through a phone call by one of the suspects, Ismaila Wasiu, the crime which was described as ‘dastardly’ was perpetrated.

The suspects according to the Police statement were nabbed at about 0230hrs two days ago which was Monday 25th of October, 2021,

According to the Oyo State Police, a fresh human head and a dismembered body which according to the Police was that of one female by the name Mujidat was found in the custody of the suspects.

The Oyo State Police however, added that the suspects who have been arrested have since been taken into Police custody while deeper investigations continue to unravel circumstances surrounding the gruesome murder of the victim and to determine if there are others who may be working with the suspects.

The Police noted that the corpse of the victim has however, been deposited at a mortuary while the suspects are being readied to face the full wrath of the law at the court of law.

“Following the receipt of credible intelligence from residents of Ayekale, Saki Area of Oyo State, at about 0230hrs on Monday 25/10/2021, alleging the duo of Ismaila Wasiu ‘m’ age 29 yrs and Mutairu Shittu ‘m’ age 35yrs, both of Ayekale Area Saki, to have been found in possession of a fresh human head.

“Operational and intelligence assets of the Oyo State Police Command attached to Saki Divisional Police Headquarters immediately swung into action which resulted in the arrest of the duo.

“The recovery of the fresh human head and the dismembered body of the victim has been identified to be one Mujidat ‘f’.

“Preliminary investigation reveals that the victim was lured from Lagos through a phone call by one of the suspects, particularly Ismaila Wasiu before the perpetration of the dastardly act.

“The dismembered body has been deposited at the morgue, while intensive investigations regarding the incident continues.

“While calling on the citizenry in the State to draw lessons from the gruesome murder of the victim, the Commissioner of Police, Oyo State Command, CP Ngozi Onadeko fdc urges all law abiding people resident in the State to give their unwavering cooperation towards the rendition of timely and actionable information capable of fueling the Command’s crusade against crime and criminality in the State.” The Oyo State Police said.