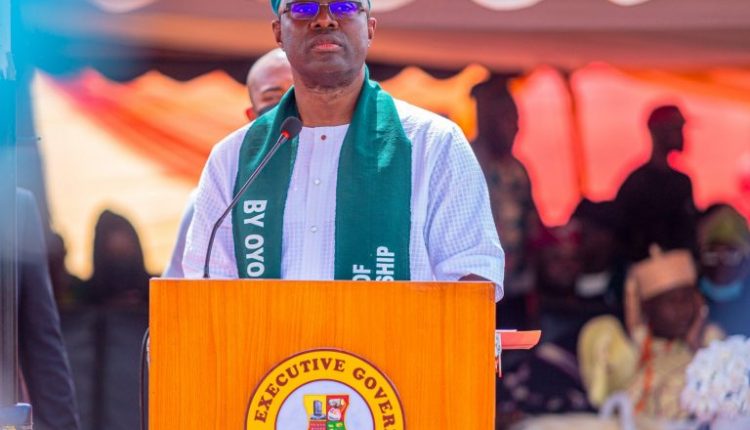 Oyo State Governor, ‘Seyi Makinde, has declared that by 2023, his administration would have spent close to N70billion to build road infrastructure in order to connect all the five administrative zones of the state.

The governor stated this in Iseyin, during the foundation laying ceremony of the newly established Faculty of Agriculture and Natural Sciences, Ladoke Akintola University of Technology, Ogbomoso.

He maintained that his government would complete the 38-kilometre Oyo-Iseyin road, the 46-kilometre Saki-Ogbooro-Igboho road and the recently awarded 76.7kilometre Iseyin-Fapote-Ogbomoso road in record time, the same way it did with the 68kilometre Moniya-Iseyin road.

He noted that the government embarked on the building of road infrastructure, to connect all zones of the state and thereby expanding its economy.

A statement by the Chief Press Secretary to the governor, Mr. Taiwo Adisa, quoted him as saying that all the roads would be completed before the expiration of his tenure.

Reiterating that the developments are fulfillments of his campaign promises, Makinde said, “We are gathered here today for the turning of the sod for the Ladoke Akintola University of Technology (LAUTECH), Iseyin Campus. This ceremony marks the beginning of the fulfillment of yet another promise that we made while we were on the campaign trail in 2019.

“Back then, all was not well with tertiary education in Oyo state; but we knew exactly what we needed to do to make things right. We talked about what we were going to do and even made some promises that people felt were impossible. But one after the other, we are redeeming all our pledges to the good people of Oyo state.

“For example, on this issue of tertiary education, we promised that we would work towards sole ownership of LAUTECH. We knew that we could not build anything else without that foundation and we kept that promise. As a result, the students at LAUTECH no longer have their education disrupted by strikes due to non-payment of staff salaries. Students can register at LAUTECH and be assured that a four-year course will take them four years to complete.

“Also, when we said we would take the multi-campus approach in order to bring educational development and by extension economic development to other zones in Oyo state, some people also thought it was impossible. Well, with today’s event, we kept that promise.”

Makinde further revealed that the state government has already released the sum of N500 million as grant to the new faculty to ensure its smooth take-off, noting that an additional grant of about N200 million is coming from the federal government.

Makinde, who stated that his government’s huge investments on education was targeted at making the state the number one destination for quality learning, said the improvements in LAUTECH have already brought about the doubling of admission applications to the university from 5,000 to about 11,000 for the 2022 admission exercise.

The governor said, “No doubt, more people are interested in coming to LAUTECH because of our repositioning of the institution. We are working towards making Oyo state the number one learning destination in Nigeria. To facilitate this, we have also directed the university administration to proceed with the application for conversion of LAUTECH to a conventional university, so it can offer other courses such as Law and Humanities. So, this is a win-win situation for all of us in Oyo state.

“You will agree with me that this type of development comes with huge economic benefits to the people.

“I am sure that the people of Ogbomoso can testify to how hosting LAUTECH all these years has benefited them. Of course, we are not planning to take away those benefits from them. As mentioned earlier, we have more than doubled the number of applicants for courses this year. These applicants will need more infrastructure. So, having another campus here will help us accommodate them.”

The governor equally said that the LAUTECH management would sit down with students who are protesting over the policy that any student who failed to pay school fees would not be allowed to sit for examinations.

He added that his government has already done everything possible to make life easy for students, noting that apart from investing on improving infrastructure and services in LAUTECH, it had also approved a 25 per cent reduction in school fees, which would be effective from the new session.

He noted, however, that the government would continue to explore ways through which it could support students.

Earlier, Barr. Ahmed Raji, a Senior Advocate of Nigeria, SAN, who welcomed the governor on behalf of the Iseyin community, said the people truly appreciate Makinde for doing so much for the town and Oke Ogun in general.

He described the governor as a promise keeper, saying that with what he has been able to do, the people of Iseyin and Oke Ogun have said he should continue.

“We thank you, we cannot thank you enough. We rever you. Iseyin people have always thirsted for a higher institution, many promises were made by previous administrations and broken. But you have kept your word,” he said.

Raji added that the governor had made and kept all promises to Iseyin, including the construction of Iseyin-Moniya road, which the administration started and finished in record time, as well as the Iseyin-Oyo road and Iseyin-Ogbomoso road, which have been started.

He said those developments were for all of Oke Ogun zone and that this was the reason all traditional rulers from the zone had converged on Iseyin, to say thank you to the governor.

Similarly, the Chairman of the LAUTECH Governing Board, Professor Ayodeji Omole, commended Makinde for being a promise keeper and doing so much to reposition LAUTECH.

How Oyo Deputy Governor Daughters Wedding May Have Worsened PDP Crisis, If Makinde Had Chosen To Be Absent