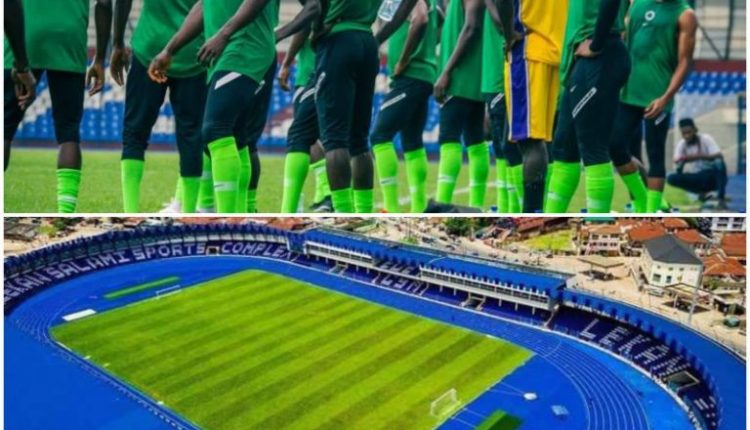 Oyo state will host the Under-23 African Cup of Nations (AFCON) qualifying match between Nigeria and Tanzania at the Lekan Salami Stadium, Adamasingba.

The state government has declared that it is well prepared to host the match which will come up by 4:00pm on Saturday.

Seun Fakorede, Commissioner for Youths and Sports said this while addressing a press conference at the Oyo NUJ Press Centre, Iyaganku, Ibadan, on Wednesday.

Fakorede said the hosting right granted the state by the Confederation of African Football (CAF) is an attestation to the commitment of the Governor Seyi Makinde-led administration to ensure a positive change in the socio-economic life of the state and its residents.

He noted that it was more important that the state is hosting the U-23 AfCON qualifiers after more than 24 years, adding that this has further proved that the present administration was delivering on its promises to the people of the state.

He assured that necessary machinery had been put in place to guarantee the safety of all stakeholders involved in the competition, including members of the public.

He also appealed to the people and residents of the state to troop out en masse and watch the match, with a view to cheering up the players to victory.

“When CAF initially expressed doubt about the capacity of Oyo State to host an international football competition of such magnitude, we boldly told them to come and inspect the facilities that we have on ground.

“CAF eventually sent its inspection team. We don’t have to bribe anyone. We simply opened the door of the Lekan Salami Sports Complex to them to inspect what we have in place.

“The CAF team carried out its inspection and it was satisfied. This led to CAF eventually giving their nod and granting us the right to host the U-23 AfCON qualifying match.

“It was just yesterday when the iconic Lekan Salami Sports Complex received a beautiful facelift after 44 years of neglect and abandonment by preceding administrations to open up new opportunities for our people to generate money and enhance value.

“This administration thus far has achieved an unprecedented remodeling of the stadium to an enviable world-class International standard.

“This international football engagement is a very important one, being a long time we had experienced such and the last being in 1999.

“This U-23 AfCON qualifying match is a very big one because when we have international matches, not only will the whole world put their spotlights on the state, the economic activities of the state will also become activated.

“We are here to witness another milestone in the Governor Makinde-led administration. The administration had laid a formidable future for the development of sports in the state.

“The records are there: Oyo State came second in the last National Sports Festival, while three medalists emerged from Oyo State in the last Commonwealth Games, held in the UK.

“Also we are about to witness another record breaking achievement in this administration in the hosting of the Under 23 AFCON qualifying match happening before our very eyes after almost 30 years of dearth of international engagements on the soil of Lekan Salami Sports Complex.

“We are therefore calling on all football loving citizen to come enmass to witness the epoch-making event and give our darling U-23 Olympic Team an overwhelming and arousing support to victory.

“I also wish to take this opportunity to charge the member of the public to cooperate with the officials. It is essential that the people should demonstrate patriotism and understanding before, during and after the match.

“This, if we do, will enable us witness the hosting of more international competitions in the state,” the Commissioner for Sports said.

Fakorede also solicited the support of the media for a successful hosting of the AfCON qualifiers, noting that such a gesture will go a long way to enable the state government to realise its goals for sports development.

“We cannot but carry the media along in such a very great event like this. This should be marketed accordingly and we cannot do this without the media,” he added.

Also speaking at the press conference, chairman of the Oyo State Football Association, Oba James Odeniran, said the state would be making history with the qualifiers.

“We are looking beyond the hosting of this first international match. Our performance will go a long way to demonstrate that Oyo State is good enough to host many others.

“It is a football match that can make or mar us. It is in the quest to achieve a successful hosting that we need the support of the media to make this happen,” he said.

In his remarks, chairman of the Nigerian Union of Journalists (NUJ), Oyo State Council, Comrade Ademola Babalola, said it is good that Oyo is returning to its old glory of hosting important sporting activities.

He congratulated the Governor Makinde-led administration for remodeling the Lekan Salami Stadium, noting that he had written his name in gold for redeeming the image of the state in the sports circle.

Others on the entourage of the Commissioner for Sports were the chairman, Oyo State Sports Council, Hon Gbenga Adewusi (Arole); the General Manager of the council, Mr Gboyega Makinde and Director, Sports Administration, Mrs Olubisi Adegoke, among others.

Motorists, Passengers Panic as Gunmen Kidnap Many on Lagos-Ibadan Expressway