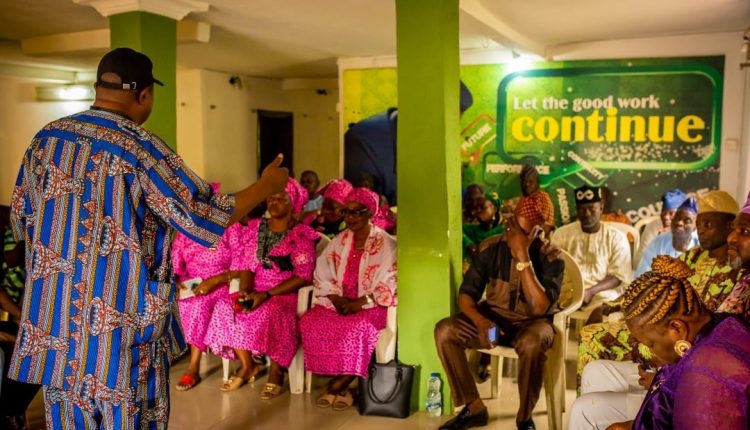 Stakeholders from Oyo South Senatorial District have pledged their support to the senatorial candidate of the All Progressives Congress (APC), Akogun Sharafadeen Abiodun Alli.

Speaking one after the other at the stakeholders meeting, aimed at strategising on ways to defeat opposition parties in 2023, the leaders acknowledged the leadership role of the party senatorial flag bearer in 2023, Akogun Sharafadeen Alli.

The Oyo South Senatorial Chairman, Alhaji Mojeed Olaoya had introduced Akogun Sharafadeen Alli as an Ibadan senior chief and a respected lawyer and astute politician who has over the years contributed to the development of Ibadanland and the state at large.

Olaoya appealed to members of the party to work very hard and never allow the senatorial district to be used as a weapon of destruction in the hand of opposition parties.

Leading, the state women leader, Chief Mrs Tinuade Adigun said the track record of the senatorial candidate of the party would fetch him vote across party lines, urging each of the women leaders to deliver their polling units and wards for APC.

He urged some of the members of the party who had left for other political party to retrace their steps and return to home.

He said; “APC has picked a right candidate for Oyo South Senatorial District. “He facilitated my pilgrimage to Jerusalem where my parents never went to. And he did that for many people even those who had left our party. We are appealing to our people to vote for all candidates of our party.”

In her own remarks, the women leader in Ibadan North East Local Government, Alhaja Asabi Olajide recalled how the senatorial candidate of the party ensured she was not cheated and thus ordered her promotion from level 6 to level 8 when he was the chairman of Ibadan North Local Government in 1993.

She said; “It is time for me to pay back what our senatorial candidate, Akogun Sarafadeen Alli did for me in 1993. I was in level 6 behind my colleagues and he ensured my promotion to level 8 (where my colleagues were then) when he was the chairman in Ibadan north local government.

On his part, the party Youth leader in the state, Hon. Aremu John appealed to all members of the party to speak with one voice and vote for all candidates of the party from the presidency to state assembly level.

Reacting to their remarks, Alli commended all the stakeholders for their supports during the primary elections, saying Oyo south senatorial district comprise of close to 40percent of total votes in the state.

He urged members to work hard and ensure they deliver larger part of the votes in Oyo South Senatorial District for APC.

Alli who promised to continue speaking with the aggrieved members of the party to join and with others in ensuring victory for the party saying members of Accord, APC and many other opposition parties in the state are having common agenda which is to ensure the maladministration of PDP is put to an end.

The former secretary to the state government said it is painful that the local government administration is dead in the state, saying the real politicians who understand the plight of the masses and how to put an end to their suffering in the state are in APC and they know how to make life more easier for the populace.