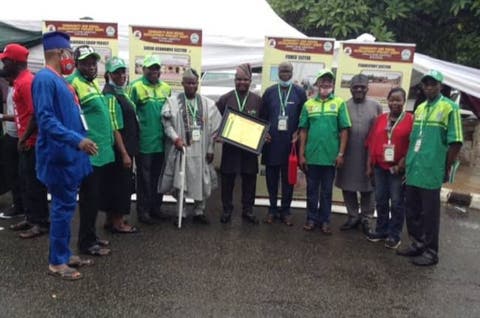 The Oyo State Community, Social and Development Agency (CSDA) has been ranked the foremost state agency with Highest Micro Projects in Water Sector in the South-West region.

The Minister of Humanitarian Affairs, Disaster Management and Social Development, Hajia Sa’Adia Umar Farouk, presented the award to the Board Chairman, Honourable Babatunde Eesuola at the close-out ceremony marking the end of the CSDP in Abuja.

The Minister noted that the commendation was to spur states to do more and continue even as the NG-CARES kick starts immediately.

Honourable Eesuola while responding to the award presentation noted that Governor Seyi Makinde has used the opportunity of the CSDP to alleviate the poverty of the people at the grass-root.

The Board Chairman also indicated that the governor’s commitment gave birth to a separate budget line for CSDA in the state budget, noting that Governor Seyi Makinde has replicated the CSDP project by approving 66 projects in 33 Local governments across the state forthwith as a continuation of the project.

Honourable Eesuola also stated the Governor has approved 866 million for the execution of the projects said the state budget is set to commence the NG-CARES project and necessary steps have been taken to commence the project as soon as work commences.