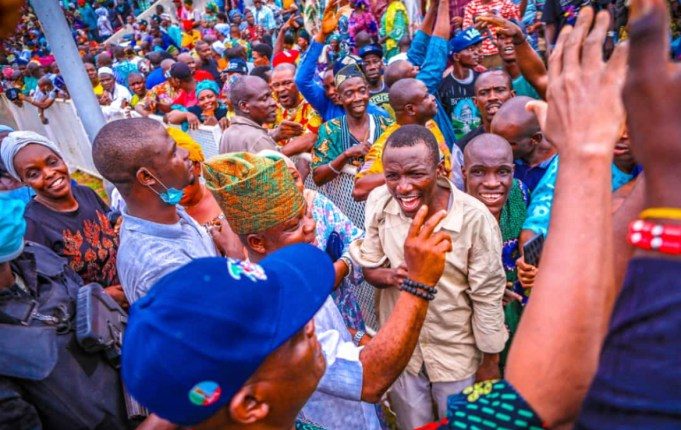 OYO101: Folarin Is The Opponent Makinde Wants To Avoid By All Means; Here Is Why | Muftau Gbadegesin

The question of who will lock horns with Governor Seyi Makinde in the 2023 election is settled. But the outcome has unsettled Oyo PDP. More than what GSM’s lickspittle might want to force down people’s throats, Senator Teslim Folarin is the last candidate the Governor wants to contest with. As facts continued to emerge, a Folarin candidacy is considered far more threatening to the governor’s re-election bid than the emergence of Oloye Bayo Adelabu. The reasons are not far-fetched. Being a former prominent PDP member, Senator Folarin understands the yin and yang, bread and butter, secrets, and fears of PDP internal arrangement.

He was a two times Senator and a former governorship candidate under the party. Admittedly, the foundation of Senator Folarin’s political life is still closely tied to the apron string of that party. He also is the last man standing from Adedibu School of politics – carrying the banner with grip and grace.

Consequently, Senator Folarin appears to be one candidate who knows how to serpentine around aggrieved members – and get them inside his pouch. His best bet would be his ability to build bridges and reconcile angry politicians across party lines, under one roof.

He is a veteran at it, a political master, and a husker. More than any time in his political career, Senator Folarin stands on the threshold of history to achieving in APC, what he could not get in PDP. Already, the clock is fast ticking as the race toward the 2023 elections gathers unprecedented momentum between these two notable candidates.

With his previous superior and tactical maneuverability; Senator Folarin appears positioned to checkmate Governor Seyi Makinde and his inner caucus – if he is underestimated – beating them at their game – tearing the incumbency factor into shred. The Oyo Central Senator understands the politics of tactics and antics, politics of the underworld. By far, he is one of the few men with simple but equally powerful political strategies. His cough alone is enough to put a crawling stop to the Auxiliary’s heartbeat!

Even though he lost the 2015 gubernatorial election by a ridiculous margin, Senator Folarin appears to have evolved politically and confidently to meet the intensifying demands, intricacies, and subterfuges of the current political reality. He is no doubt one of the candidates to beat in the coming election.

Acutely aware politics is not served on a silver platter; Senator Folarin seems to have devised ingenious and impenetrable tricks that can blast through an enemy’s fortress, deliver satisfying results and flog opponents to stupor. Given the way he captured the Oyo APC structure from the acclaimed majority, his emergence is enough to send a rippling and disrupting chill up the spines of the ruling PDP. Even though Senator Folarin defeated his archrival in the primary by a wide margin, time will tell whether people opposed to his leadership style will work for hands in gloves with him in the interest of the party.

Unsurprisingly, the Senator might have succeeded in capturing the party, and crucially won the party’s hotly and breathtaking primary, but the real battle as events unfold still lies ahead. He might have demonstrated his deep knowledge of politicking within his party, how he’s able to convince the electorates is also a matter of time. Unlike the 2019 election when the candidate of the APC, Oloye Bayo Adelabu had a running battle with identity politics, Senator Folarin will have no problem selling his candidacy using the religion card. As usual, religion will play its usual depressing role in that election.

In a way, it is an open secret to say that the relationship between Governor Seyi Makinde and the state Muslim community is frosty and sour. Carefully, there is a growing, though the mostly unreported concern of marginalization among Muslims in the state. This is evident in a series of scathing statements released by most of its notable organizations against the government. Perhaps, most of the foul plays and disaffection are a resultant effect of the political fallouts of the 2019 election.

The candidate backed by the state Muslim community Oloye Bayo Adelabu was roundly trounced by Governor Seyi Makinde. With that, the mutual suspicion on matters of recruitment and appointments has only heightened the simmering tensions. The community, it is believed, is warming up to strafed back at the Governor at the poll. And Senator Folarin appears placed to reap from that second fallout.

The race towards the election in Oyo has begun in earnest but the usual factors that separate the wheat of winners from the chaff of losers remain the same. “The fact that we know where we are heading” to show the unpredictable nature of power and politics, as one scholar beautifully captured it “does not mean we know what to expect”.

OYO101 is Muftau Gbadegesin’s opinion on issues affecting Oyo state, is published every Saturdays. He can be reached via muftaugbadegesin@gmail.com and 09065176850