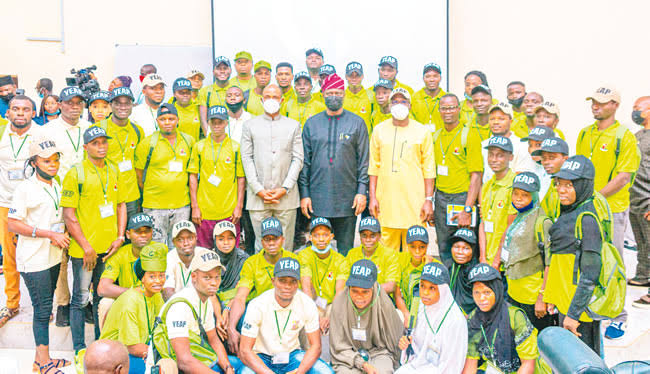 One of the defining features of Governor Seyi Makinde’s 2019 campaign is his youthfulness. Many described his impossible energy, unbridled passion, enthusiasm, optimism, stamina, and perhaps impressive success in the tumultuous oil and gas industry as qualities that stood him out of his peers. Riding on the tidal waves of anger and resentment against the jinx broken government of late Senator Abiola Ajimobi; Governor Makinde’s introverted ideals, and populist ideas evoked some aura of charisma, invincibility, and infallibility.

In the buildup to the last poll for instance, most electorates assumed his era would usher in enormous opportunities for the teeming youth. They contended that his success in the private sector would help him deliver on his mandate. When a leader is loved and admired by the people, they project in him/her some mythical, magical and heroic attributes. They forget that leaders also have flaws and are humans, too. That they are also susceptible to the glitz and glamour of power. And can be carried away by the pleasure and pressure of their jobs.

Most get swallowed by the challenges they signed up to solve. They get consumed and overwhelmed trying to find their feet. It’s only when some get settled that they begin to realize how dangerous leadership is in the first place; more important, the type of leadership that’s serious about rocking the boat of the status quo while shaking things up for equilibrium. Considered a game dominated by the old order; Governor Makinde unusual foray into the murky water of politics and eventual victory underscores a paradigm shift in anal of the state political trajectory: If you can rally your ambition around the everyday worries and troubles; you can be assure of victory at the poll. The ability of the Engineer turned politician to gather people around their pains, plights and agonies made it possible for him to convincingly pummeled his opponents and trounced his traducers. He was smart at leveraging on the wisdom of the crowd and importantly the energy surge of the youth.

In part because his electoral fortune wouldn’t have been possible without the tireless, timeless and relentless efforts of young people who volunteered to share and spread his message across the state nooks and crannies, lengths and breaths. When the Governor entered the gubernatorial race in 2015, he was widely described as a political rookie but by 2019, he has grown in political leaps and bounds with volunteers mostly youths scattered across the 33 local government of the state.

Unfortunately, the same set of people Governor Seyi Makinde was supposed to help through empowerment schemes, policies are the one who are now disaffected. From the YEAP disappointment to the bursary embarrassment to lack of trust in the youth evidenced in the Governor’s recent and avoidable outburst on the local government chairmen across the state. The list as they say is endless. In addition, the disaffection within the ranks and files of the PDP youth is a time bomb waiting to explode. We are all witnessed to the leaked WhatsApp voice notes decrying the abandonment of their welfare and wellbeing by the Governor. That’s just a tip of the volcano that’s going to erupt the party as election beckons. Remember the Governor was supposed to flag off his campaign in Oyo town only to shelved it at the last minutes because most party faithful refused to come out to meet the him and his daredevil convoy! Guess what the Governor advanced as justification? He said they have resolved to repay aggrieved aspirants! You don’t resolve crisis because you have election at hand in matters of months when people know you are a serial defaulter!

Isa Rahman is one of the early beneficiaries of the Oyo state youth entrepreneurship in agribusiness project (YEAP) in August, 2021. When the mail congratulating him chimed in on his phone, he was excited. His excitement was in part due to the stipend attached to the program. Plus, the rigors of the program application shows it’s not for the faint-hearted or lily-livered. He was asked critical questions about his startup and how the program would help advance his agribusiness. So, when his application sailed through, he was over the moon. The intensive technical training was billed to hold for two weeks after which connections to mentors, business partners, development organizations and other agripreneurs (www.oysada.org) would be rolled out once government is assured of the genuineness of the proposal.

Kunle Bashir shared his story by lauding the Nasarawa training. He said the program is eye-opening and relevant to survival at this turbulent period. He commended the state Government for selecting the venue despite the distance and the danger of traveling through that axis. He said the training facilities plus the quality of food, accommodation and training tablet were all the more reasons to be thankful and grateful for the opportunity. He said such adventure made him realized how impactful government can be once it’s driven by young, vibrant and brilliant minds. “My optimism for this government in the build-up to the program was sky-high “ he said “now, the tank of trust in that system has dried up”.

The seed capital required to set up their startups hasn’t been paid and no explanation has been given. Most of the beneficiaries are in quandary, utter confusion. For some, the Governor has tricked them. He has deceived them into believing he’s one of them. Joseph Margaret was also among the beneficiaries. The daughter of a farmer, her intention going for the training was to advanced her knowledge so she could train others about modern approach to farming. Of course, she was able to do walk others in her farm through her newfound knowledge but couldn’t proceed to the next level because the capital required to take-off is yet to be released.

“Some of us have resigned to fate” she dejectedly said “because this government appeared capable of doing life-changing things at the start but after the enthusiasm and the praises that followed the YEAP program, nothing has been heard so far. It’s like being left in the meaningless rut, you’re not just confused, you’re also stuck and in shock “.

But the youth revolts against the Government of Seyi Makinde goes beyond YEAP. Interesting yet heartbreaking stories abound in the state youth Parliament where members have been abandoned, to bursary disbursement, youth empowerment, employment opportunities, and so on. For example, various infrastructural projects like Light-Up Oyo projects (N28billion), Bus terminal constructions (N20billion) were awarded to contractors outside of the state and guess what: those ones outsourced their manpower outside of the state as well. How much can a Governor love the people he rules? The same is applicable to PLATINUM consultant that manages the finances of state owned tertiary institutions.

The only youths that are satisfied and contended about Governor Makinde’s performance are the ‘data boys’. The internet e-rodents who get paid to parrot and project everything Makinde glowingly. Of course, they are detached from reality. As a matter of fact, most of them continued to suffer from what psychologists described as confirmation and desirability biases: the biases that prevent us from applying our intelligence; that contort our intelligence into a weapon against the truth.

OYO101 is Muftau Gbadegesin’s opinion about Issues affecting Oyo state, published on Saturdays. He can be reached via @TheGMAKing on Twitter, muftaugbadegesin@gmail.com and 09065176850