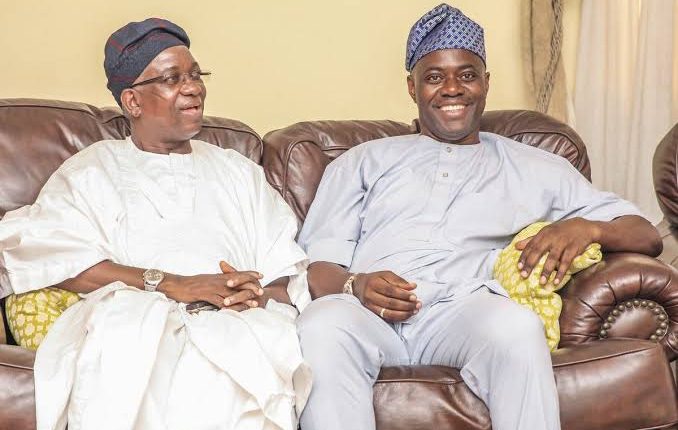 The festering frosty relationship between Governor Seyi Makinde and his deputy, Engineer Raufu Olaniyan is big News; big enough to force the government to surreptitiously shift its weekly state executive council meeting officially stipulated for Tuesday of every week to Friday, 3rd of December, 2021 same day and time the ‘Nikkah Fatiha’ of the deputy Governor’s daughter was billed to hold.

In a sense, this bitter politicization of personal affairs is also big enough to drive the governor’s camp to hurriedly slate the official commissioning of LAUTECH, Iseyin campus to Saturday, 4th of December, 2021 same day and time the marriage ceremony is pegged to take place in Ibadan (it’s ridiculously embarrassing the Governor has allowed his handlers to ridicule his office by conducting official business on a Saturday, the same day a former US President, Donald Trump would have spend in his expansive Mar-A-Lago resort in Florida, Golfing!).

Recall the feud between former Governors Senator Rasheed Ladoja and Otunba Adebayo Alao-Akala, in 2006. And how that public display of politics of mudslinging almost disrupted the fragile peace enjoyed across the state nooks and crannies. With the open yet illegal endorsement, support, backing and approval of Late Ibadan Political godfather, Alhaji Lamidi Adedibu and the silent go-ahead by former President Olusegun Obasanjo; the mayhem carried out by political dingbats through that illegal impeachment of Senator Rashidi Ladoja for eleven months plus the brimstone unleashed on the state at that time was incomparable to anywhere in the country.

In an unlikely twist of event, history seems to be repeating itself albeit in a different dimensions. For instance, the same PDP that was in political wilderness for eight years wandering and drowning in the quicksand of its self-inflicted harm is also the one creating an exceedingly bitter scene where people now witness disturbing, and destroying politics of vilification, traducing and defamation. How is it that Oyo PDP always found itself between the rock and the hard place in matters of managing and massaging egos and pride?

I have written about the rumors flying around the Governor and his Deputy deeply personal crisis on the 23rd of Oct 2021. In that column, I argued that the same criteria that made the deputy fits into the type of running mate that could aid and fuel the 2019 election should its wheel grind to a halt now constitute what’s been used by the Governor’s honchos to hunt, taunt, and perhaps to clip his wing as next election draw closer.

For the record, the bone of contention between the Governor and his deputy still remain largely sketchy, one dimensional, unsubstantiated and uncorroborated rumors. And that’s partly because coming out to the public to discuss personal matters does not help anyone – since people are busy sorting their lives which perhaps makes the whole political dogfight between the Governor and his deputy an uninteresting smack-down – only that it’s now fascinated people across the state.

It is in this rumor, spread wantonly, hearsays, and fake news, ubiquitously rampant, that have turned to high-decibel of slanging political conundrum, the one that has metastasized like wildfire. Quite disheartening and heartbreaking seeing Oyo state in the hands of two professionally trained engineers who incidentally are politically disunited and divided. The saying that when two elephants fight, it is the grass that suffer comes into play.
Running a government requires effective, proactive, purposeful leadership, deep concentration, synergy, cooperation, collaboration and team work. The open display of enmity between the Governor and his deputy shows the very core foundation upon which this purposeful and effective leadership rests is faulty and cannot be relied upon to deliver dividends of democracy to the people across the state.

In addition, this open confrontation provides a compelling information into scores of existential threat rocking the ruling People’s Democratic party and the cracks that have surfaced in government as a whole. And as it stands, the likelihood of this epic battle ending before this administration is slim. Perhaps more interesting is the argument in some quarters that the Deputy Governor’s ordeal is a clear attempt to spite the Muslim populace in the state; since there are cases too real to be ignored to buttress this whole insinuation.
In a sense, no issue is as contentious and controversial as the thrusting of religion into Nigeria politics. While every politicians latch on to it to stoke ember of discords and appease their bases; discussing and debating its pernicious effects on body polity, principle of justice, equality, fairness and equity are always greeted by denial and dismissal.

Religion and politics in Nigeria in generally have become so touchy-feely that it is the last thing an average Nigerian want to talk about in public. But conversely, left with no other option to explain his personal predicament, that same average Nigerian won’t blink twice or mince words in pushing forward his bigotry and zealousness when he suspect foul play in issues that concerned them.

Then the mind blowing and clandestine discrimination in appointments and recruitment at various agency and parastatals. The list is endless and has created an unimaginably tough stands between the state Muslim community exemplified by their strongly worded press statements. “Not naming the groups that face barrier only serves those who already have access” says Robin Diangelo in White Fragility “the assumption is that the access enjoyed by the controlling group is universal”.

In short and as Ron Heietz and Marty Linsky declared “Leadership takes the capacity to stomach hostility so that you can stay connected to the people, less you disengaged from them and exacerbate the danger”.