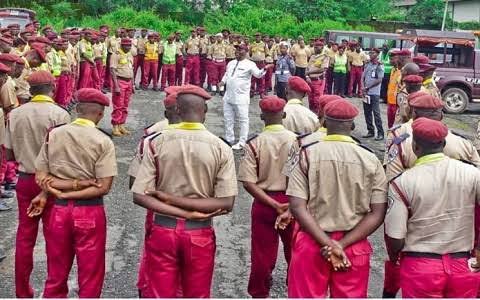 OYRTMA Reacts To Allegation Of Extortion, Says Blackmail Will Not Deter It From Executing Its Mandates (Read Official Statement Here)

The Oyo State Road Traffic Management Authority, OYRTMA has reacted to the news going round on the social media that its officers are riding commuters of money and collecting money into private Accounts.

In a statement released by its Management on its official website and social media page, the Authority said it will not be deterred by cheap blackmail by some set of people from executing it’s legislative responsibilities.

See the release below:

“Our attention has been drawn to a news publication making the rounds on social media with allegations that the Authority receives fines into private company’s account, credited to one Oluseye Ojo.

“While we appreciate the writer for showing concerns about the operations of the Authority, we berate his article for lack of merit as he relied solely on the reports of a known serial traffic offender and political opposition figure, one Mr. Arisekola Ojo who is bent on tarnishing not only the hard earned reputation of the Authority but that of the Oyo State Government.

“Ordinarily, we would not have responded to such cheap blackmail but for the sake of unsuspecting members of the public, this rejoinder becomes imperative for outright rebuttal of Mr. Oluseye’s baseless and unsubstantiated claims.

“For public knowledge, our investigations havr revealed that the said offender, Mr. Arisekola Ojo is known to be a perpetual lawbreaker who has been arrested severally by road traffic officials for contravening numerous traffic laws and stipulations such as disobeying traffic light, taking one-way route among others. His recklessness on the road in recent past, our investigations revealed, has caused road traffic accidents that inflicted severe injuries to other road users. His inability to disavow the offence for which his vehicle was earlier today impounded further proves that he is an adamant road traffic offender.

“Therefore, it is only shocking that an acclaimed journalist of repute like Mr. Oluseye Ojo who had more than thrice in the past capitulated on his relationship with the Authority to seek for release of impounded vehicles for which the Executive Chairman had to personally pay the fines, could easily be used for pecuniary gains to peddle such unsubstantiated claims against an Agency with which he shares a personal relationship and enjoy unfettered access to its leadership throughout its chain of command.

Albeit, the Authority is unperturbed by these allegations. It is crucial we state in unequivocal terms that in accordance with Section 17(N) of the Oyo State Road Traffic Management Authority Law, 2009 as amended is empowered to “enter into agreement(s) with any person or Corporate Organizations for the supply, construction, CAPACITY BUILDING, manufacture, maintenance or repair of any property whether moveable or immovable, WHICH IS NECESSARY OR APPROPRIATE FOR THE PURPOSE OF THE AUTHORITY”.

“This is the constitutional clause with which some local Governments explored in synergizing with the Authority as shown in the document attached below.

“These Local Governments, as evidenced below, employ the services of private towing trucks to carry out their operations and as such, fines are paid to the government coffers and service charges to the designated accounts of the towing companies.

“Additional, you may recall that few days ago in its usual magnanimity, the Authority directed it’s men and officers to suspend apprehension of vehicles that broke down as a result of fuel scarcity in Ibadan and other major cities and thus partnered with several private towing companies to assists in towing such broken-down vehicles with no charges to safe locations.

“On another account, erring vehicles apprehended during joint operations with the Police, Federal Road Safety Corps, Local Government Task Forces and other agencies in charge of road traffic are fined in a way that fines are remitted to government covers as well as the towing services company engaged. This practice is as obtained elsewhere and not peculiar to Oyo State.

“While the Authority under the Executive Chairman, Mogaji Akin Fagbemi Ph.D operates an open-door policy that entertains public complaints from over 7million residents of Oyo State in order to improve service delivery, we frown at fabricated stories capable of misleading the public particularly by journalists yawning for cheap popularity by tapping from the good name of the Authority and Oyo State Government particularly as we gravitate towards political season in the country”.