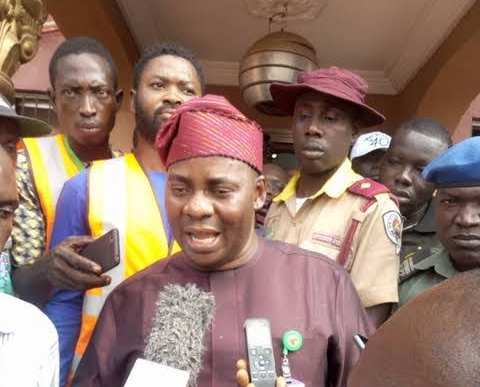 The Oyo State Road Transport Management Authority (OYRTMA) has refuted in strong terms the case of theft allegedly involving some men of the Authority paraded around 0800hours of today 25th March, 2021 by the Nigerian Security and Civil Defense Corps (NSCDC), Oyo State Command.

In a press statement made available to newsmen by the Executive Chairman of OYRTMA, Mogaji (Dr.) Akin Fagbemi, the Authority is in absolute dismay over the unsubstantiated allegations that lacks due investigation and fortified with unprofessionalism and too much haste for media trial by the NSCDC whose Officers and men were saddled with the responsibility of protecting facilities of State.

In his words, “The Authority is utterly surprised at the news that our men were involved in the stealing of 70 bags of maize COVID-19 palliatives. This is not only false, it is unusual, highly derogatory and devoid of any modicum of professional investigation procedures.

When our attention was drawn to the arrest of our men at about 2030hours of yesterday 24th March, 2021, I, alongside other top officials of the Authority visited the office of the NSCDC to ascertain the matter at hand. Unfortunately, we could not meet any of the high ranking officers concerned as those on duty claimed not to be authorized to talk on the matter. At this point, we could not access our men involved as their mobile phones and other means of communication had been taken away from them.

As early as 0700hours of today 25th March, 2021, we had begun preliminary investigations into the circumstances surrounding the arrests in conjunction with the Executive Assistance on Security to the Executive Governor of Oyo State, CP Sunday Odukoya Rtd. and top management officials of the Oyo State Printing Press whose vehicle was alleged to have been involved in the movement of some bags of maize at the time of the incident.

Findings from our investigations revealed that:

While we shall pursue this case to a logical conclusion and ensure that our erring officers are made to face the full wrath of the law, we wish to reiterate that OYRTMA would not condone such acts inimical to the wellbeing of the good people of the State and detrimental to the good and positive image of the Governor Makinde led Oyo State Government”, Dr. Fagbemi said.

My wife Is A Serial Adulterer, Divorce-Seeking Man Tells Court