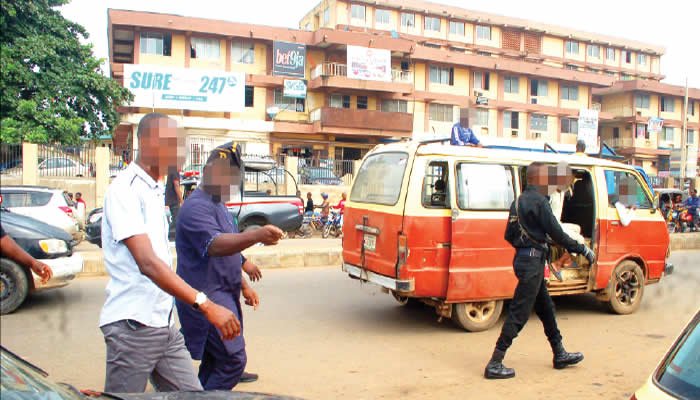 Park Managers On The Prowl In Oyo

Inter-state commercial drivers who ply the Iwo road, Ayaba, WEMA, New Gbagi Market, Alakia/Brewery Roads in Ibadan and other areas of the state have made an outcry, lamenting the outrageous rates and other charges collected by alleged Park Management System workers and the abuse they are subjected to, TOSIN OYEDIRAN writes

Commercial drivers in the last few months have been lamenting the unending demands, unprofessional attitude, abuse of power, among several others by acclaimed Park Management System staff members, especially in Ibadan, the Oyo State capital.

The PUNCH reports that the Seyi Makinde-led administration’s creation of the PMS “to oversee the road transportation sector in the state” has been met not just with disagreements but also with fatal clashes, fights, public violence, fear, and even pending petitions and court cases among the known National Union of Road Transportation Workers and the new PMS.

The commercial drivers, who spoke with The PUNCH, shared similar voices and complaints.

Mutiu Ibitoye, an Ikirun-based driver who spoke in Yoruba, said, “You just see these boys jumping on the road, no uniform as a means of identification, no ID cards, no professional approach when you are accosted. They hurl threats to deflate our motor tyres and abuse us.

“In fact, many of our people get beaten. The sad thing is that they have no particular stop point, even on days when they are not on patrol, in traffic, different areas in Ayaba, Iwo road, Gbagi, Alakia and the likes. The Oyo State Government should help do something about it. Being organised brings about effectiveness. “

Another motorist, who identified himself as Mr Musbau Tanimola, said, “Nobody would pray that any business they venture into should be at a loss. We understand these road workers, whether they are still PMS, NURTW or whatever, I would not know, have been tasked by their superiors and there is a certain lump sum of money they are to remit daily.

“However, drivers shouldn’t be at a loss either. Traveling from Lagos without any stop or hindrance is commendable, but having to drive through Ibadan to connect to other states will be a problem. We pay more than N4,000 to N7,000 sometimes.

“And since there is no clear record, the prices aren’t fixed. You can pay N1,500 at one stop and N2000 at another. When you are stopped at another point, you tell them you will pay a particular sum. They lay claim that they are the official, original, and recognised rate collectors. This disparity between the two unions should be resolved. The government should find a lasting solution to it.”

Alfa Alesh Abdulrasaki, in his own observation, said, “Let me show you the pass we are given at every stop point;” (hands them out to our correspondent to see). Cartons of cigarettes and local gins are cut into pieces; can you imagine receiving that as a pass/permit after being extorted?

A staunch member of a road union body who spoke off record said, “These allegations are mostly true and I believe the Oyo State Government will take positive and timely action about it. Sometimes, these excesses are from overzealous road workers who do more than they are instructed for their own motives.

“Also, as regards the impersonation and the ‘who is who’ tussle between NURTW and PMS, another thing. Until the two parties are reconciled, I fear the chaos may still linger. Yes, the PMS system has been adopted in some other states too, but the chaos, if any, is being effectively managed.”

Another Ilorin-based driver, Soji Ilerioluwa, said, “It seems the problem is quite peculiar to motorists who link Ibadan to Osun and those heading to Ondo, Ekiti, Edo, and the likes. Issues like this barely happen with us (drivers) who ply Ijebu-Sagamu, Ibadan to Oyo, Ogbomoso, and Ilorin.

“Sometimes, these patrols take place when passengers are scarce. So they (road workers) set out on the road to raid drivers who want to evade paying the rates. However, their approach is unbecoming as they unleash terror unnecessarily on drivers who have no reason to pay. They go after “Sole drivers,” a local parlance for drivers who pick their passengers randomly by the roadside instead of using the motor parks. I was in June, mistaken for one, and one of their boys broke my windscreen. Their boss there that day tried settling it, and I had received N20,000 so far, when they eventually realised I had been wronged. I will say there are decent people, but serious work needs to be done to remove the chaff, the bad eggs hiding amongst them.”

News had filtered in 2020 that the governor had created the PMS, which officially brings about an unavoidable sidelining of the already recognised National Union of Road Transport Workers, which the union’s President, Professor Tajudeen Baruwa, explained, and had again earlier this year, 2022, reiterated that “the union is one of the 42 industrial unions affiliated with the Nigeria Labour Congress. It was created by the federal government to cater for the interests and welfare of workers in the road transport sector.”

Prior to the current administration’s inception into office in 2019, Oyo State had had Chief Lateef Akinsola (Tokyo) and thereafter, the late Chief Lateef Salako (Elewe-Omo) and Taofeek Oyerinde (Fele), also late, as NURTW chairs successively. The current leader, Lamidi Mukaila (Auxiliary), was formerly a factional leader in the NURTW before being appointed by the governor to head the PMS.

However, the PMS recognition and the NURTW marginalisation caused internal schisms in the transportation sectors, resulting in several deaths in the state. The latter was banned on May 31, 2019, as announced by the State’s Chief of Staff, Chief Bisi Ilaka, just two days after the governor was sworn-in into office, while the first was launched in 2020.

Efforts to get the PMS public relation officer, Alhaji Emiola Jelili, to comment on the issue was futile as calls placed on his lines were not answered or returned. The text messages sent to his line were also not attended to.

Also, the Oyo State Commissioner for Public Works and Transport, Professor Dahud Sangodoyin, did not respond to calls and a text sent to his line as well.

However, the Oyo State Chief Press Secretary, Mr Taiwo Adisa, in a telephone conversation with The PUNCH stated, “When we are talking about PMS operations; their spokesperson is best placed to give clarification. They know the operatives and who they send to the field. They know how to separate the wheat from the chaff. Government officials are not on the field watching these things. I don’t know about these allegations and if there are infractions amongst the road users and the PMS are unable to do something, you can take it up with the Ministry of Transport.”

Asked about if there is a code guiding the ethical conduct of the PMS, the CPS stated, “PMS has a code of operation. The CP (Commissioner of Police) of the state was there when they reel out the codes of operation. They have uniforms they can be identified with. They have and know what to do and what not to do. So, their operation is not shrouded in secrecy.”

The PUNCH reports that there are two major court cases over the issue. One was the Oyo State High Court sitting in Ibadan’s nullification of the appointment of park managers, inaugurated in 2020 by the Seyi Makinde-led administration.

Justice M. A. Adegbola, who presided over the case filed by the former chairman of the National Union of Road Transport Workers in the state, Abideen Olajide, popularly called Ejiogbe, described as illegal the collection of rates by the park managers appointed by the state government.

The governor was quoted to have said, in a reconciliation meeting with the two fighting unions, that he intended to leave a legacy which not just other states but the federal government would emulate.

“This is not the first time Oyo State will be at the forefront of a case like this. In the 70s, FRSC (Federal Road Safety Commission) started here. When they saw how it was organised and yielding good results, it was adopted at the federal level. Now, I want you to write this down again – the Federal Government will adopt PMS, and it will be on record that it started in Oyo State,” Makinde had boasted.

Also, the NURTW members, in another petition dated March 24 and signed by their counsel and a former Attorney General and Commissioner for Justice in the state, Mr. Michael Lana, in which the NURTW also that it was illegal for the state government or its agents (PMS) to be collecting union dues from commercial drivers because the NURTW was not proscribed and the matter was still pending before court.

The Oyo State Government should as a matter of urgency rise to the occasion and address the issues raised by concerned road users and stakeholders so as to bring about desired convenience and peaceful day-to-day living not just for Oyo people but for other Nigerians.