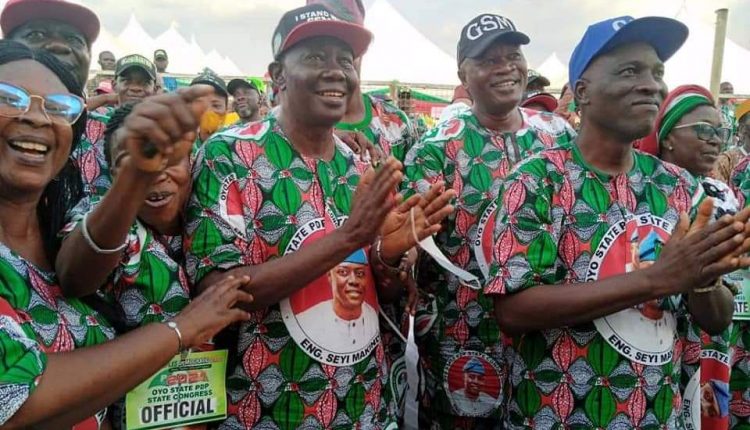 Oyo State Governor and Leader of the Peoples Democratic Party (PDP) in the state, ‘Seyi Makinde, on Saturday, declared that with the way his party was able to organise itself and unite for the State Congress, it has the capacity to unite Nigeria.

The governor, who stated this at the congress held at the Open Court of the Lekan Salami Sports Complex, Adamasingba, Ibadan, said if given the opportunity to govern the country in 2023, the PDP will end the divisive tendencies in the country and place it on the path of unity and oneness.

A statement by the Chief Press Secretary to the governor, Mr. Taiwo Adisa, indicated that the governor equally called on all members of the party to rally round the new state executives to better reposition the party.

At the congress where Hon. Dayo Ogungbenro was elected as State Chairman, with Hon. Wasiu Adeleke returned as State Secretary, among other positions, Governor Makinde maintained that the party remains open to accommodating everyone aggrieved.

He said: “Today is very symbolic. I congratulate the executives that we have just elected today.

“It is historical because this is the first time that we are coming for an elective Congress and the situation is carnival-like. Now, I am sensing the same thing for our National Convention. They should watch out, PDP will unite Nigeria.

“Today, we don’t have much to say. The only thing I will say is that those who said they are aggrieved can see what has happened here today.

“PDP belongs to all of us. They must come back and get integrated into the fold and we will accommodate them.”

Earlier, the Chairman of the Oyo State PDP Congress Committee and Governor of Enugu State, Ifeanyi Ugwuanyi, commended Makinde for his sterling leadership, which, according to him, has ensured the sustainability of the PDP in the state.

“I salute the sterling leadership of my brother and friend in Oyo State, Governor Makinde, who has engendered the manifestaton of parity in one fellowship and sustainability of PDP in the state.

“I respectfully acknowledge all the executive leaders of the party here. Your contributions and sacrifices are highly appreciated. I also appreciate the support and solidarity of our teeming supporters.

“My team and I are in Oyo State at the behest of the National Working Committee of our party to conduct the party Congress. And I am assuring you of a very transparent, free and fair process,” Ugwuanyi said.

The new Oyo State PDP Chairman, Ogungbenro, in his speech, also lauded Governor Makinde, stating that the new State Working Committee would work hard to make the party the darling of the entire state.