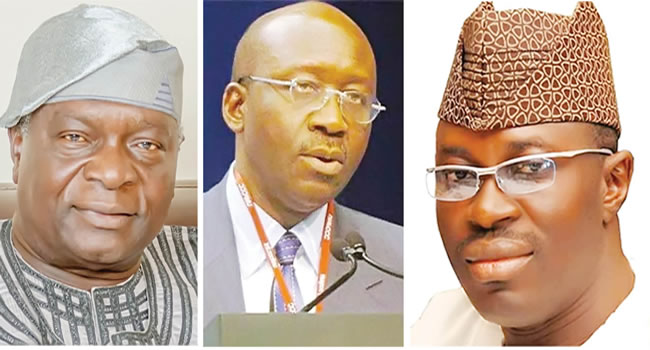 PDP Convention Fallout: How Oyinlola Rejected Govs Offer To Step Down •Inside Details Of How Arapaja Beat Oyinlola

MORE details emerged on Sunday on how erstwhile national vice-chairman (SouthWest) of the Peoples Democratic Party (PDP), Ambassador TaofeekArapaja humbled Prince Olagunsoye Oyinlola in the election of deputy national chairman (South) at the party’s convention held on Saturday in Abuja. PDP, in the early hours of Sunday, elected Professor Iyorchia Ayu as its new national chairman, alongside 20 other members of the new National Working Committee (NWC) that will take office December 9.

The Nigerian Tribune learnt that the election came amid failed last-ditch attempts by governors elected under the party to get former governor of Osun State to step down for Arapaja as the anointed candidate for the post of the national deputy chairman (South) of PDP.

Following a decision to back Arapaja for the post, the governors had invited Oyinlola to a meeting where they appealed to him to step aside in the interest of the party.

But Oyinlola was said to have told the governors that he was on his own when he was approached to contest for the National Working Committee (NWC) post.

However, worried by the negative message a lack of consensus going into the convention might cause, the governors resolved to send emissaries to his house to continue their pressure on him.

Five of the governors were said to have besieged Oyinlola’s house in Abuja, on Thursday night, with “a proposal,” which sources said did not appeal to him.

Details of the said proposal were not disclosed by the sources.

When the governors realised that they were not making any headway, they decided to allow Oyinlola and Arapaja to contest, but state delegates were mobilised for the ex-Oyo deputy governor.

Sources added that the other PDP governors resolved to throw their full weight behind Ambassador Arapaja because of the overall interest of PDP in the South-West in subsequent elections, especially the 2023 general election.

At the poll proper, Arapaja garnered 2,004 votes to defeat Oyinlola, who polled 705 votes, while a total of 165 votes were declared invalid.

Hajia Inna Ciroma, who is wife of the late former Minister of Finance and PDP chieftain, Malam Adamu Ciroma, also vowed not to withdraw from the race for the national deputy chairman (north) in favour of Umar Ilya Damagum despite the pressure from the state governors.

She had insisted that she had paid her dues in the party, where she was a minister and woman leader.

Mrs Ciroma also frowned on the lack of inclusion of women in the PDP leadership and pointed out that her emergence as the national deputy chairman could assuage the womenfolk.

Her insistence caused the National Convention Organising Committee (NCOC) led by Governor Ahmadu Fintiri of Adamawa State to promise a constitutional review that would ingrain affirmative action in the party constitution.

Savouring his emergence as the consensus national chairman of the PDP on Sunday, Professor Iyorchia Ayu, boasted that the former ruling party is back to rescue Nigeria from the mess he said the All Progressives Congress (APC) has plunged it into.

He said those who imagined that the party would break up at the convention are dreamers, as he assured that Nigeria is not divided but suffers from the maladministration by a few. He promised that the PDP would reunite all parts of the country.

The former president of the Senate stated: “I want to sincerely appreciate the PDP family. Today is simply a thank you address. When we started this party 23 years ago, we never in any way imagine that the journey will get us to these stage, a stage where we ruled for 16 years, we went into rough times, but for anybody who will bother to see PDP is back.

“PDP is back to rescue Nigeria from the terrible mess we have been in in the last six years.

“Many people imagine that this convention will lead to the break up for the PDP. Those people who are dreaming like that, they were dreaming in wonderland.

“Those, who have lost hope, should today know that Nigeria is not a divided country. A small group of people decided to divide Nigeria. PDP will come back, unite our people, put them together, North and South, East and West.

“I believe the order party can never hold a convention because even state congress they cannot hold. They have produced 92 state chairmen for 36 states. How can they hold a convention? We are watching.

“This is a challenge to them. Let them come and hold a successful convention, which the PDP has done. This is a quit notice. PDP is back and is taking back the country to develop it.”

In another development, Oyinlola has sent a message of congratulations to the newly elected national officers of the PDP.

Oyinlola, had earlier sent a private message to Arapaja congratulating on his victory and wishing him a successful tenure. Arapaja has also acknowledged the message with appreciation.

In a general message to the new PDP leaders, Oyinlola, while describing the success of the national convention of the party as a good omen for Nigeria and Nigerians said he was confident the party is in very good hands.

He also thanked the founding fathers, all party leaders and his supporters across the country for the strength of their support for him and their love which they radiated around him throughout the contest.

The ex-governor lauded his colleagues in the PDP Governors Forum for holding the forte of the party while promising that he would continue to play his role as a leader and strengthen his support for the PDP and its organs.

In the meantime, party members under the National PDP Professionals and Business Group (NPPBG), said that with Ayu as substantive chairman, the party would win the 2023 presidential race with ease.

He, however, pleaded with the stakeholders especially the founding fathers and leaders of PDP to seek a political solution to the court cases initiated by the suspended national chairman, Prince Uche Secondus in the interest of the party in order to consolidate the gains in recent past.

He noted that the peaceful outcome of the convention would brighten PDP chances of “unseating the clueless ruling APC and its unproductive and retrogressive government come 2023.”

He added the group supported the 35 percent quota promised women in both elective and political appointments, just as he assured commitment of the organisation to mobilising professionals and business men and women to the party ahead of 2023.

VIDEO: My Election As Oyo APC Party Chairman In Conformity With Party Rules—Omodewu Speaks On Legitimacy Of His Emergence