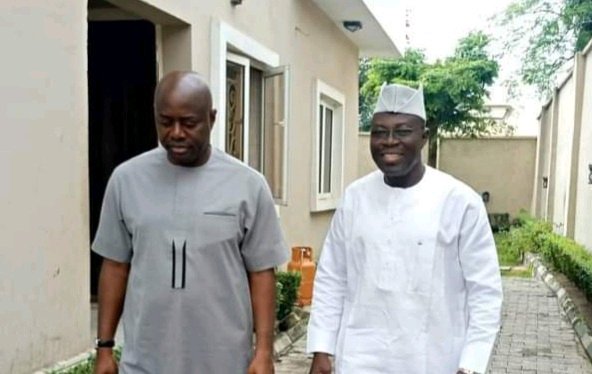 It appears fresh crisis may be brewing in the Southwest Zone of the Peoples Democratic Party (PDP) after a party source revealed to the Punch that Oyo State Governor, Seyi Makinde is backing the candidacy of Taofeek Arapaja, for the post of deputy National chairman at the 30th and 31st of October national convention because there is a possibility he may end up being the national chairman of the party.

According to the Punch, two factions of the PDP in Osun State led by Senator Ademola Adeleke/Sunday Bisi and Akin Ogunbiyi/Soji Adagunodo are planning to team up together for the candidacy of former Governor of Osun State, Olagunsoye Oyinlola, to challenge Arapaja, for the position of deputy national chairman after the PDP screening committee disqualified Prof. Wale Oladipo, from the race.

Not pleased by the decision of the screening committee, some PDP stakeholders in Osun State accused Governor Makinde of masterminding the disqualification of Oladipo to pave way for Arapaja to emerge the new deputy national chairman. They further alleged that the Governor withdrew his support for Oyinlola, who he initially endorsed, after realising that whoever becomes deputy national chairman may end up becoming national chairman in case PDP zones its 2023 ticket to the North.

Recall that the position of the national chairman of the party has been zoned to the North and the Northern stakeholders of the party ratified former Senate president, Iyorchia Ayu as its consensus candidate. However, reports claims that Ayu reached a deal with the Northern cabals of the PDP that if the presidency is zoned to the North, he will be the one to resign and support the party. Considering that fact that PDP may throw open its presidential ticket as it has been speculated in some quarters, then if Ayu is forced to resign if a Northern presidential candidate emerges, Arapaja may be considered to replace him being the deputy national chairman, and the fact that the Southwest appears to favoured ahead of other regions in the South to produce the next chairman of the PDP.

Makinde At Fayose’s Son’s Wedding: “Those Of You Who Want To Die Because Of Us Politicians, Be Careful”