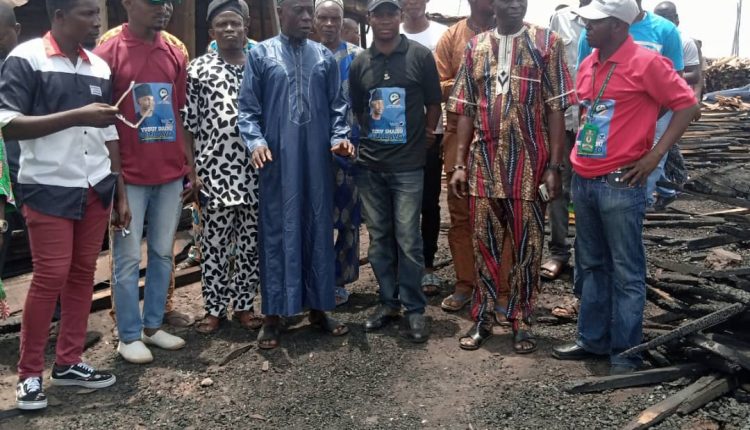 Hon. Yusuff Shahib Oladayo, the Chairmanship candidate of the PDP, Ibadan North, during a visit to the scenes of the fire incident at the gbaremu and plank sellers market in Bodija respectively

Agba Egbe as fondly called, along side all the councilorship candidate, visited the Plank Market, Bodija and gbaremu fire Inferno respectively to sympathise with victims of the fire Inferno that razed several shops and destroyed goods worth millions and also to look out for lasting solution to fire disaster occurances…

The inferno, which started co- incidentally at the two locations on Monday night , was not going to be the first of It’s kind of major fire incident in the popularly Bodija market. But no life was lost.

Men of the Oyo State Fire Service Safety Commission remained on the site to completely put the situation under control and salvage unaffected goods. They were joined by teams of firefighters from Federal Fire Service as well..

Agba Egbe, who described the incident as “unfortunate”, allayed the fears of the traders, saying the local government, if elected into office on may 15, 2021, was more interested in supporting the victims back on their feet, rather than ejecting them from the site.

The chariamanship candidate, who was received by a large crowd of traders, said there would be thorough investigation to unravel the cause of the inferno, while pleading with them for a little time to get the full executive rights in office before embarking on efforts to re-construct the burnt shops.

I’m Not Used By Govt, I Petitioned Igboho To Save My Life And Name From Embarrassment – Petitioner