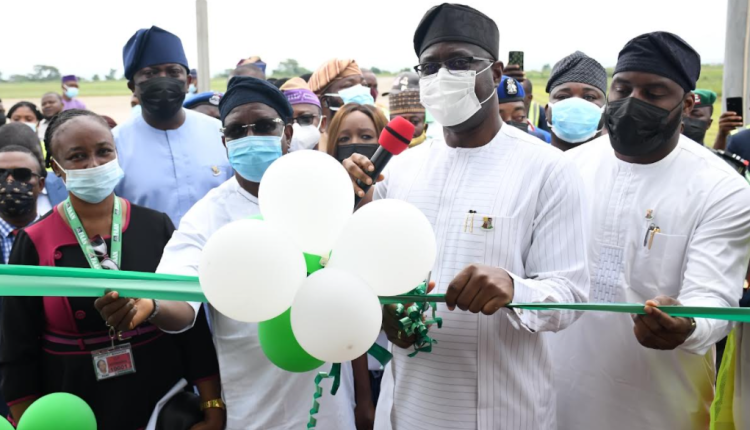 Air Peace on Tuesday launched scheduled flight operations to Ibadan Airport as the airline was received by the Olubadan of Ibadan, His Highness, Oba Saliu Adetunji at the Airport

The inaugural flight, operated with the airline’s brand new Embraer 195-E2 aircraft, touched down at about 11am and was greeted with a water cannon wetting by Federal Airports Authority of Nigeria, FAAN, fire service unit.

In his welcome address, Oyo State Governor Seyi Makinde said the coming of Air Peace airline to the state is a big relief to the teaming city travellers as the airline has immediately “crashed the airfare from Ibadan to Abuja to affordable level.”

Makinde, who said the state would make the route an economically viable one for the airline, added: “The coming of Air Peace will strengthen and enhance the economy of the state. We have a dry port here that will facilitate the clearing of goods in record time. This will take the stress off importers in the state and neighbouring states and save them the stress of going to Lagos port to clear goods.”

Makinde, who also inaugurated the Airport Protocol Lounge rehabilitated by the state government, disclosed that contract for the construction of an aviation fuel facility at the airport had been awarded.

He said the facility would enable airline operators to use Ibadan as their operational base.

The governor said the state would also ensure that the airport serves as an immediate alternative to the Lagos airport in case of weather or other challenges.

The governor expressed optimism that the commencement of air flight operations by Air Peace airline at Ibadan, would promote the economy of the state.

The Airport Manager, Mrs Tega Aiyenuro, said the Ibadan airport, been the only airport close to the Murtala Mohammed International Airport Lagos, was a viable alternative for flights to any part of the nation and the world.

She called on other airline operators to come to Ibadan airport for business.

Also speaking, the Chairman of Air Peace, Allen Onyema, promised to link Ibadan to every geo- political zone of the country.

Onyema said opening of the Ibadan route is part of the airline’s “no-city-left-behind” aimed at interconnecting various cities across.

Other dignitaries at the airport to witness the inuagural flight included officials of the state government, former National Assembly members, including Senator Kola Balogun and Chief Lekan Alabi who delivered the OluIbadan welcome address.