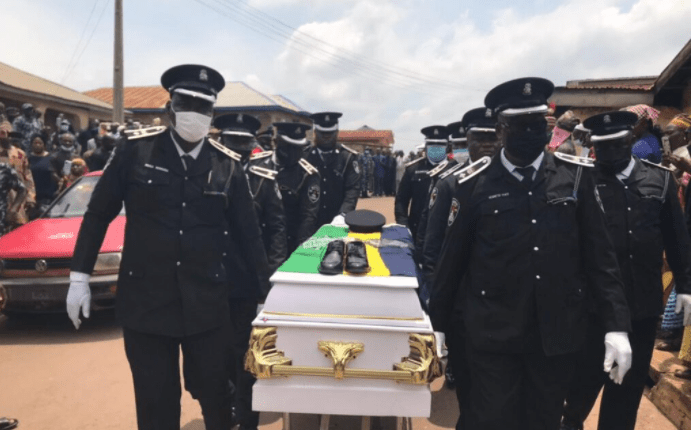 According to thenewsbearer.com, people had been coming in trickles to pay their last respect to the slain officer..

Before his remains were brought to Ibadan, his ancestral home, the Lagos State Police Command, which was saddened by the killing of its gallant officer, had prepared for his final rest, both in Lagos and Ibadan. And on Friday, a brief farewell ceremony kicked off with lying-in-state of the body early in the morning at the police command headquarters in Ikeja.

The Deputy Commissioner of Police in charge of Operations in Lagos State Command, Ahmed Magaji Kotangora, said Abonde was a diligent and disciplined officer.

According to Kotangora, “the gathering and presence of police officers from the command has said it all. He was very dedicated. He was always in the frontline in the fight against crime and criminality in the police command. We actually miss him pray for the repose of his soul.”

The DCP promised that all the entitlements for late Abonde would be paid to the family without waste of time.

“The Police Force is actually mourning this unfortunate incident. All his entitlement will be given without any delay,” DCP Kotangora stated.

“We are trying to find out the perpetrators of this heinous act. What we will like to know is: who killed him? That is our concern, that is our mission. In due course, the investigation will be completed and the perpetrators will be charged to court,” he said.

OYO101: The Return of Oyo Commissioners And Its Implications For GSM Re-election Bid | Muftau Gbadegesin