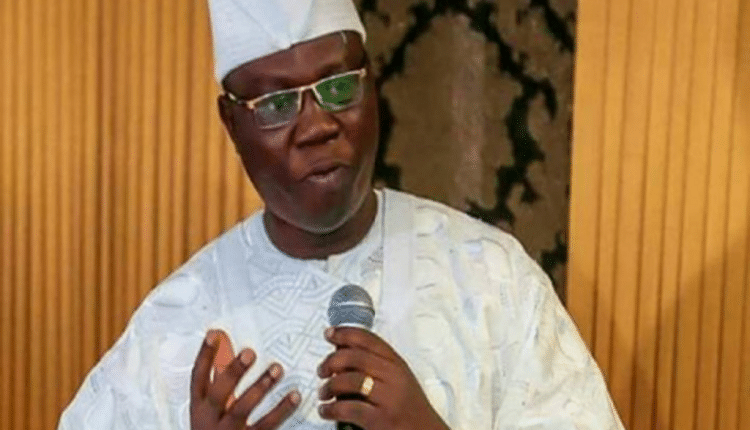 Aare Onakakanfo of Yorubaland, Iba Gani Adams says well-known politicians in the South-West have infiltrated the struggle for the actualisation of Yoruba nation.

Aare Adams insists the agitation for O’odua Republic is a legitimate right of all Yoruba sons and daughters.

At an O’odua Peoples Congress (OPC) Stakeholders meeting held at the O’odua House in Ikeja, Lagos, Adams called the politicians “betrayers of the Yoruba course for true liberation”.

Adams announced he had commenced 7 days of curse against those instigating crisis in Yoruba land and plotting to scuttle the efforts of O’odua Republic agitators.

“I will continue to curse them repeatedly for seven days because they deserve nothing but the wrath of God and that of the Yoruba ancestors”, he said.

The leader regretted that some of the protagonists of the O’odua Republic are agents being paid to frustrate the liberation movement.

Adams said it was unfortunate that certain influential citizens were determined to weaken the spirit of the genuine secessionists.

“Unfolding events in the last few weeks have shown that some prominent politicians have hijacked the struggle for the actualisation of O’odua Republic.

“It is an attempt to distract us. I want to say here that the struggle to seek a new nation is our legitimate right that we are determined to live and die for and we wouldn’t waiver in our beliefs and determination to liberate our race.

“First, we must show enough diplomacy. Second, we must be conscious of how we generate our information and intelligent- gathering and I will surely keep the third to myself”

“We should be diplomatic enough while addressing issues, we should work on the way we gather our Intelligent reports, and we must be consistent in our quest for total freedom.

“As the Aare Onakakanfo of Yorubaland, I have put in close to three decades’ experience in the struggle and I know what it takes to win a struggle of this nature.

“For those who have been infiltrating the struggle, I will curse them for seven days. The whole thing is targeted at soiling my name and that of other Obas in Yorubaland. Nothing good will come out of their attempt”, Adams added.