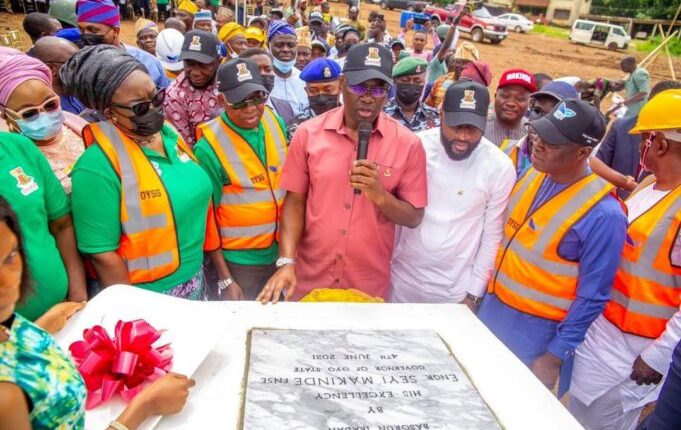 This was disclosed this during the flag-off of the GRA, located in Basorun, Ibadan, a joint venture between the Oyo State Government and Allianz WA Company.

Governor Seyi Makinde of Oyo State, while speaking, said he plans to provide liveable and affordable homes before the expiry of his administration, through increased partnership with private investors and utilisation of innovative building technology.

In his words: “In our journey towards the Greater Oyo State of our dreams, one of the envisaged milestones of success in our agenda, is the provision of affordable and decent homes for the increasing population of the State”.

“We are responding to this challenge through the conceptualization of on-going GRA across the State. This will not only increase collaboration with private investors, it will also open doors for innovative technology to increase the speed of completion”, he said.

The Managing Director, Allianz WA, Mr. Adeyinka Owodunni, described the project “as the first of its kind” in Oyo State and promised that the company would not rest on its oars in ensuring it delivers the best to Oyo State.

He said that the GRA is a preparatory step towards absorbing the influx of business and people into Oyo State, adding that the Chief Lere Adigun GRA is a low density upper-middle class residential scheme with 137 service plots, each measuring at 100 sq meters.

He said that the GRA, which has generated an instant Two Billion Naira IGR accumulation for Oyo State would boast of a centralized power, water sources, close loop security architecture and a below ground electrical reticulation, which is first of its kind in Oyo State.

Other features of the GRA is a 3km road network, 6km drainage and waste water evacuation system and a strong deed of adherence to ensure conformity and harmony of home owners.

“The proposed plan is to have centralized power, which will avoid individual use of generator or drilling of boreholes. It will also prohibit excessive fencing of residential accommodation. The strongest foundation that will catapult the GRA is the deed of adherence”, he said.

Commissioner for Lands, Housing and Urban Development, Mr. Raheem Abdulraheem disclosed that the GRA, which is one among the 5 other GRAs conceptualized in Ibadan is named after late Engr. Lere Adigun, a states-man who was known for his priceless contributions to good governance, selfless leadership and sustainably built environment.

He said the multiplying effect of the project on the State’s socio-economic landscape of Ibadan and Oyo State is priceless and inestimable considering its potentials to generate employment opportunities and impact positively on the Real Estate industry in the State.