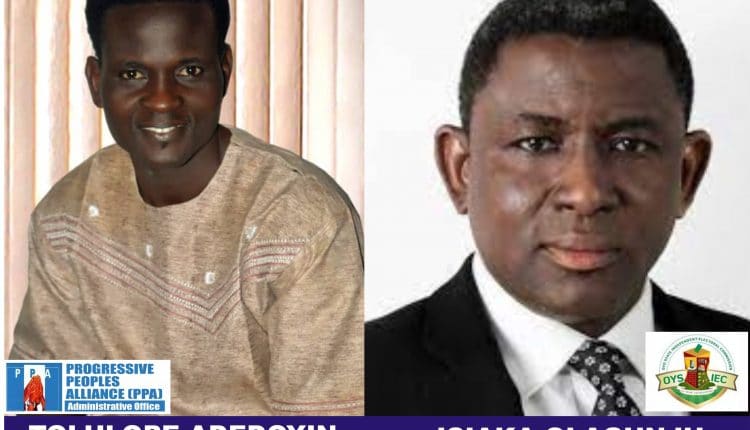 The Oyo State Chapter of the Progressive Peoples Alliance (PPA) has expressed its readiness to participate in the forthcoming Local Government Election scheduled to take place on the 15th of May, 2021 by the Oyo State Independent Electoral Commission (OYSIEC) under the Chairmanship of Mr. Isiaka Olagunju.

This was contained in a Statement made available by the Chairman of the Party, Tolulope Adedoyin in Ibadan, the Capital of Oyo State on Wednesday.

The Progressive Peoples Alliance (PPA) through a letter dated 12th of April, 2021 addressed to the Chairman of OYSIEC, Mr. Isiaka Olagunju indicated her interest to participate in the May 15 slated local government election. The letter which was acknowledged by Awosu O.H, a staff of the electoral body was submitted with a 51-page court judgment delivered by Justice M.B. Dongban-Mensem and four others on the August 13, 2020 which compelled and mandated the Independent National Electoral Commission (INEC) to relist the party as one of the registered political parties in the country.

Progressive Peoples Alliance (PPA) is not new in the electoral system of the country and Oyo State. In 2003 and 2007, PPA won gubernatorial elections in Abia State. It also won the 2007 governorship election in Imo State. Likewise in the 2007 Nigerian National Assembly election, the party won three of the 360 seats in the House of Representatives and one of the 109 seats in the Senate.

The Party however warned that it will resist any attempt by OYSIEC to deny her members of their democratic rights to participate and contest in the forthcoming Council poll.

PPA finally asked OYSIEC through the acknowledged letter to furnish her full details, electoral resources and other valuable information needed for her party’s participation in the slated council Poll.

S/W PDP Zonal Congress: Makinde Knew Nothing About Auxilliary’s Attendance At Congress, He Exercised His Freedom Of Movement — CPS Attacks Fayose, Others