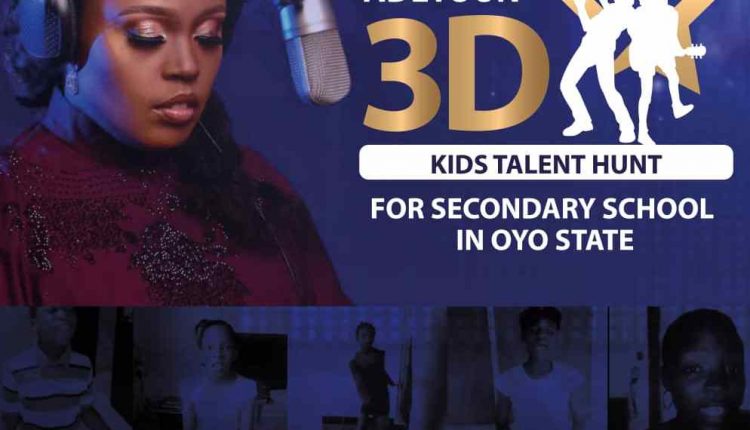 In a bid to help young kids discover their talents, Adetoun Adekoya Oshodi has set out plans to organize a 3D (Discover, Develop, Dazzle) Kids Talent Hunt across seventy secondary schools within Ibadan, the capital of Oyo State.

The event is scheduled to hold on Wednesday, 26th May, 2021 at Felicia Hall, Jogor Event Centre, Ibadan as proposed by the organizer.

The convener of 3D Kids Talent Hunt, Adetoun who is a past second runner up at the popular reality TV show, MTN PROJECT FAME SEASON 5 expressed that the inspiration behind this project is the opportunity given to her in the past to discover her talent beyond just school.

According to her, education is important in life but there are lots of talents that have been killed due to the fact that a lot of people see things from the educational point of view alone.

“Truth be told, the existing curriculum of most schools focuses primarily on developing the student’s academic capabilities; However, this is just one of the many channels through which a child can be formed and equipped for GLOBAL RELEVANCE.

“The discovery of their music gifts can just be one of the channels to greatness just like MTN PROJECT FAME discovered me in SEASON 5.

“We will be visiting 70 secondary schools in Oyo State ( both private and public) to conduct music auditioning in each of the schools with the goal of picking the best 3 in each school in order to compete in a larger poll of over 150 students at the final 3D KIDS TALENT HUNT” she said.

Adetoun Adekoya Oshodi is a versatile recording artist and has carved for herself a niche in the music industry. Her music prowess and dexterity has solidified her as a creative force in different genre of music.

Oyo ADC Kick Against Calls For Postponement Of LG Elections