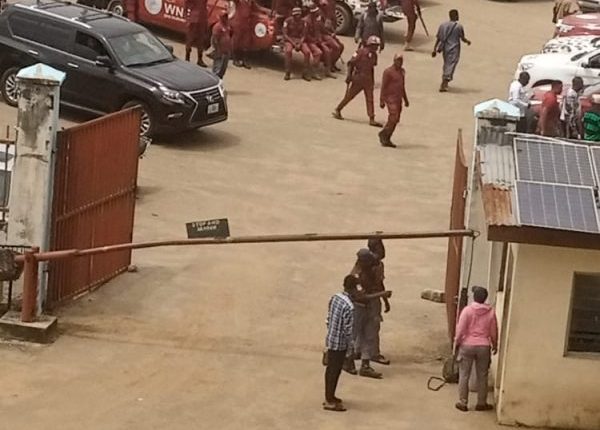 There is palpable tension in Ogbomoso, Oyo State as residents protest the alleged killing of three people who were reportedly killed by kidnappers, while trying to pay ransom .

It has been gathered that during the process of paying the N5 Million ransom requested by the kidnappers, the irate men who had a clue about the presence of soldiers in the town on Wednesday night, took the ransom and brutally murdered the three, while the other volunteer escaped with injuries.

Soldiers had reportedly stormed LAUTECH area yesterday ostensibly to provide security, sequel to the increasing waves of kidnapping in Ogbomoso.

The development is believed to have sparked anger from residents.

“Soldiers were deployed to Ogbomoso yesterday but the bandits thought we invited the soldiers and so they opened fire on the victims and the men who took the ransom money there”, a resident lamented.

In the meantime, some hoodlums have reportedly attacked Alabaa of Abaa in Ogbomoso, Oba (Dr) John Bolarinwa Ayanpoju, for his alleged role in the killing of two kidnapped victims, Olugbemiga Owolabi, an hotelier and his staff, Rachael Opadele, including the okada operator who conveyed the person bearing the ransom, to the kidnappers in Abaa area, Ogbomoso last night.

According to report, the hoodlums attacked the Alabaa because he helped find the Okada man, Idowu and another volunteer who conveyed the money to the bandits.

In the meantime, another resident informed newsmen that the volunteer who happened to be the fourth person, was injured.

Newsmen who visited Aba on Wednesday morning reported that residents of the area barricaded Ogbomoso-Ilorin old road, protesting the killing of their relatives by the kidnappers.

At the palace of Alabà, Oba Bolarinwa Adepoju John, and along the streets of the town; chiefs, residents, security operatives were sighted in batches but the monarch was unable to grant an interview as he was totally disturbed by the incident.

“Alabaa of Abaa had to be rushed inside his residence to avoid the wrath of the youths, who blamed him for the death of the okadaman.

“The hoodlums were spoiling for war with the traditional ruler and his people had to rescue him. But he only tried to help the victims.

“The kidnappers knew of the arrival of the soldiers who were said to number over 100 in Ogbomoso yesterday night and unfortunately, they thought the families of the victims invited the security agents and so in anger gunned down the three persons”, he added

As at press time, the road at Abaa (Old Ogbomoso-Ilorin road) has been blocked, meanwhile, policemen have taken possession of the three corpses and taken them to the hospital to conduct post mortems, thus preventing the families from retrieving their dead.