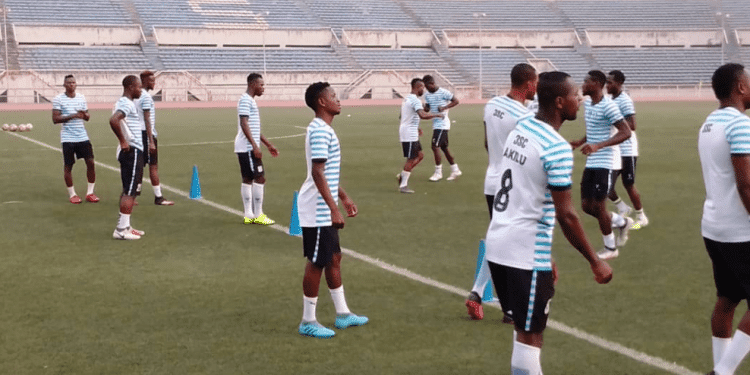 Ahead of Wednesday’s NPFL matchday seven encounter against Niger Tornadoes, the players of Shooting Stars Sports Club (3SC) of Ibadan, have been challenged to win back the hearts of their teeming fans with a positive result in the game.

The Ibadan soccer lords were held to a 2-2 draw by Southwest neighbours, Sunshine Stars of Akure in a matchday six fixture, a result that did not go down well with their home fans, who showed their displeasure over the results.

Addressing the players before their training session at the Moshood Abiola Stadium, Abuja, both the Team Manager Dimeji Lawal (MON) and the Chief Coach of the club, Edith Agoye, spoke to the players about the importance of the match against the Minna based side.

“I have been talking about how Ibadan people attach much importance to their team. With what happened last Sunday, I know you must have seen it”, said Kabongo, as the 3SC Team Manager is popularly called.

“All they wanted is good result and because we failed to give them that on Sunday, they expressed their anger. There were lots of negatives comments about your abilities to excel.

“Now, you have an opportunity to let them know that you are all in this team by merit and the only way to do that is for you to go out there tomorrow (Wednesday) and get the three points against Tornadoes.

“That is the only way to endear yourself into the hearts of the fans. We believe so much in you, we know you have what it requires to do it. All you have to do is to go in there and get the job done”, concluded the ex International.

Corroborating the words of the Team Manager, Coach Agoye, expressed his belief in the boys, urging them to go for the kill right from the blast of the referee’s whistle.

“I believe you got the message of the Team Manager. Sincerely, we have no doubt about your ability to deliver.

“I know most of you are still not happy with what happened on Sunday, just like us, but now is the time to let them know what we have and what we can do. Just make sure you don’t play under pressure, relax and play your game”, added Esin, as the gaffer is fondly called.