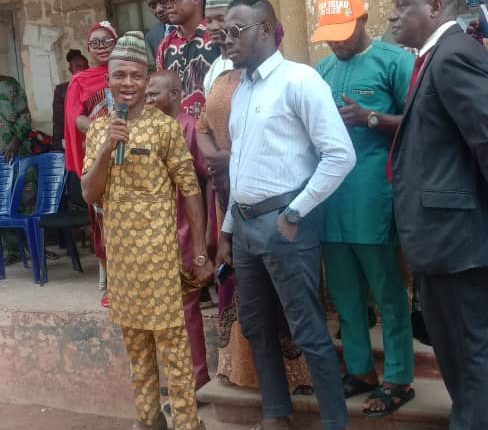 The Executive chairman, Hon. Yusuff Sahib Oladayo (Agba Egbe) has said he is ready to work and give his absolute support to workers in the council, giving the narrative that public funds should be spent for public benefits

Agba Egbe on Monday said the demands and request of the workers in the council should be considered as a major priority and as such be attended to ; only if such request are channelled through the right source for execution …

According to him, the local government with the new hands on deck is drawing up and brainstorming on creating additional revenue sources that will enable it to sustain the welfare and comfort of the workers

The Chairman made these disclosures during a prayer and interactive section with the council workers held at the local government council.

Agba Egbe said the Government of engr. Seyi Makinde understood the day-by-day challenges being faced by workers in the State to do their tasks, which will further hasten the implementation of the workers request

In addition, the chairman assured and pointed out ways to hasten the implementation of the workers request to motivate workers and encourage them to cope with challenges that may hinder their productivity.

He said: “As a government, we take the issue of workers very seriously. We know how important and germane it is to the wellbeing of our people. We are technically ready to implement the request made . As part of our Campaign promises, workers needs should never be neglected.

“We understand the position ibadan north local government occupies, and we understand the challenges workers are facing, especially here at the Council. So there we need to together at this time, for promote productivity from the workers’ to the growth of State.”

During the prayer and interactive section with the council workers, Agba Egbe listened to various demands of the workers, which included car loans, office furnitures at various offices, Power Supply as the council has been without power for several months .

The head of local government, Mr Oluwamuyiwa Olaolu commended the chairman, describing him as “a listening leader” who had shown his selflessness going by the little time in office as all interest had been to the benefit of the masses and workers