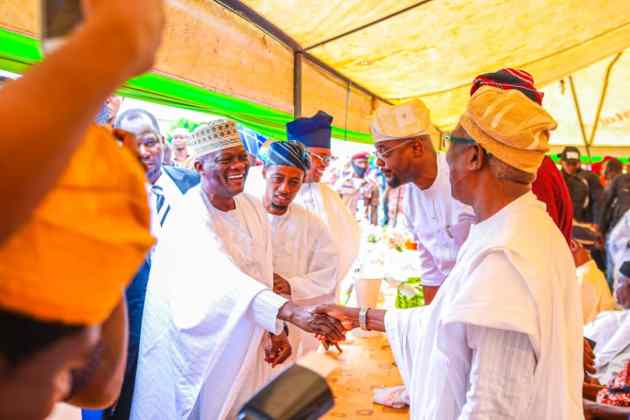 Raufu Olaniyan, who was removed earlier this week as deputy to Seyi Makinde, governor of Oyo State, seems to have gotten over it.

Relying on a report of a panel that didn’t allow Olaniyan to explain himself, Oyo State House of Assembly had within few minutes of reading, pronounced him removed.

While Olaniyan is of the All Progressives Congress, APC, Adeola, a former house of representatives’ leader under the Peoples Democratic Party, PDP, is the senatorial candidate of the Social Democratic Party, SDP, in the 2023 election in Oyo North. Both, together with others, left the PDP owing to alleged neglect in the running of the affairs of the party by Makinde.

Seated together at the party were Teslim Folarin, three-term senator and governorship candidate of the APC in the 2023 election; Nureni Akanbi (Iba Oluyole), a leader of the PDP and Olaniyan’s ally; Olusegun Odebunmi, three-term reps member; Olamiju Alao-Akala, former council chairman and APC reps candidate in Ogbomoso.

Also at the event we’re chieftains of the SDP and APC.

Trial Census Under Way In Oyo