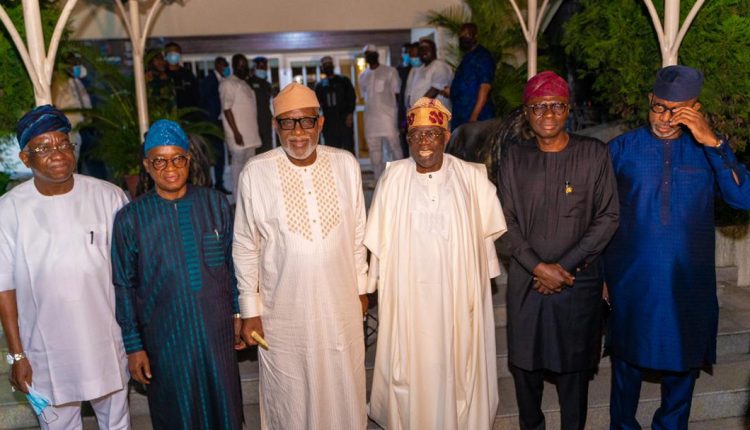 The Deputy Governor of Oyo State, Engineer Rauf Olaniyan alongside the Five other governors of the South West converged on Lagos State House Marina, to discuss issues that affect the region.

While speaking to the press after the event, the Chairman of the South West Governors’ Forum and Governor of Ondo state, Arakunrin Rotimi Akeredolu, declared that the meeting was to discuss the way forward for the South West and discuss matters that affect the region.

The Ondo state Governor said they discussed matters pertaining to the common heritage of the West, the Oodua group of companies and issues bothering on security of the western states.

The chairman stated that the content and agreement of the deliberations, which was held behind closed doors for about 2 hours and a half, will not be made public.

After the meeting, the Forum visited the National Leader of the APC and former governor of Lagos State, Asiwaju Bola Tinubu at his private residence in Bourdillion street, Ikoyi.

Akeredolu said, “we deemed it fit to visit our leader who has returned home successfully and who is hale and hearty and to the glory of God almighty”, that is why we have visited him.