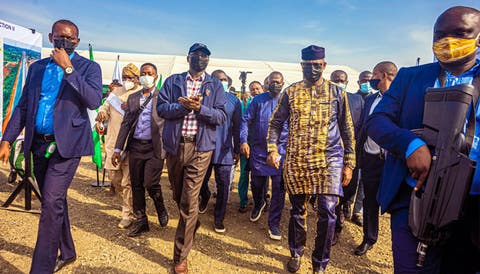 The Minister of Works and Housing, Babatunde Fashola, on Sunday said the Federal Government would complete the Lagos-Ibadan Expressway project despite scarce resources as a result of the sharp drop in oil prices.

Lagos-Ibadan Expressway is a trunk A road located in the South-West region of Nigeria. It was contracted in two sections (I and II) to Messrs Julius Berger Nigeria Plc and Messrs Reymond Construction Limited respectively.

At an interactive town hall meeting with stakeholders at Ogere in Ogun State, Fashola told the contractors to ease traffic congestion during the forthcoming yuletide period.

He said the dual carriageway commenced from the old toll gate at Oregun/Ikosi-Ketu Lagos and terminated at Shagamu Interchange in Ogun State.

This was contained in a statement issued in Abuja by the Director, Press and Public Relations, Federal Ministry of Works and Housing, Boade Akinola, on Sunday.

Fashola noted that the Section ll, about 84km, started from Sagamu Interchange to Ibadan and was being handled by RCC.

The minister was quoted as saying, “These highway projects are financed with the Presidential Infrastructure Development Fund funded from the Sovereign Wealth Fund and they are national priority highway projects.”

Fashola appealed to contractors handling the project to accelerate work to ease traffic flow especially during the forthcoming Christmas season.

He said it was also for the rehabilitation of existing bridges on the road.

Adebiyi stated that considering the heavy traffic on the highway, both contracts were changed to include the construction of new flyover bridges, interchanges and pedestrian bridges, which made the contract sum to be at the tune of N134,861,785,702.80 and N176,503,901,413.68 for both sections 1 and 2 respectively.

The Managing-Director, RCC Limited, Nabeel Esawi, said work was moving on well on the project and that the total asphalt length in both direction of the road was 95km.

He promised that the work would be delivered on schedule.

Why we’re Not Pressing Charges Against Arrested Hoodlums – Teslim Folarin