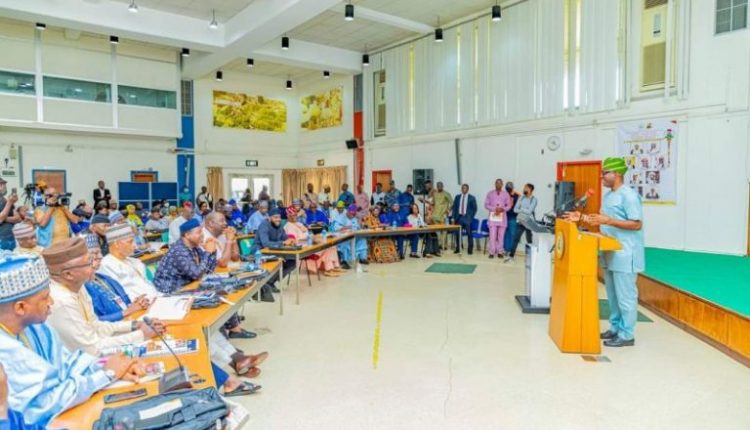 The governor of Oyo state, ‘Seyi Makinde has urged legislators in the National Assembly and State Houses of Assembly, to launch strong deliberations on the country’s twin concerns of resource control and state police.

He stated that the twin concerns had become critical, and that lawmakers should begin to address them as part of the constitutional amendment process.

The governor remarked this in the keynote presentation he delivered at the Conference of Presiding Officers of Nigeria Legislature, held in Ibadan on Saturday.

According to Makinde, state police will aid in addressing the growing problem of insecurity in states and across the country.

He asked politicians to give more attention to some of the underutilised discussions about constitutional amendments.

“You will agree that at every point in human existence, things happen that make conversations that were generally too difficult to have, open up for people to contribute freely. For example, some years ago, Nigerians were not ready for the conversation about women in politics. But today, things have so changed that the conversation is not even about whether women should be in politics or not, but about putting in place some form of affirmative action, to ensure that they get a particular percentage of elected public office.

“Similarly, the reasons that have been given for avoiding the conversation about state policing and resource control have recently lost relevance. Nigerians are demanding that their governors play the role of Chief Security Officers of their states. They are asking that the governors be empowered to run the security architecture of their states.

“Here in the southwest, the governors came together to create an alternative that would support the efforts of the federal security agencies through the Western Nigeria Security Network. The people can see for themselves how things are working out. The Amotekun Corps has brought relief to them. The spate of kidnappings and clashes among farmers and herders has drastically reduced. Our rural farmers are returning to their farms knowing that they have an added layer of protection. They can see that the benefits of state police far outweigh any fears that they might have had.

“Having seen the success recorded by the Amotekun Corps in a little over a year of operations here in Oyo state, we took a step to strengthen them further.

“We are recruiting 500 more members – we started with 1,500 corps members. I must say this is by far the largest number in any state in the southwest. Just yesterday, we supplied them with an additional 100 operational vehicles. The people are happy about this because they can see the work that Amotekun is doing.

“So, there is no better time than now to discuss state police”, Makinde affirmed.

Speaking on the need for the legislature to also engage in a robust discourse on resource control, the governor went further to say: “There is an ongoing national conversation about equity and fairness. We have seen the press release figures that show that it is just a few states that are contributing to the Value Added Tax, which everyone is sharing.

“We have long talked about the states that are producing the oil that we all are sharing proceeds from.

“Everyone has seen how some states do not even make an effort to raise their Internally Generated Revenue (IGR) because they are comfortable with receiving federal allocations from work done by others. But now that the receipts are dwindling, even those states are waking up to the conversation and asking if they can keep what they make.

“Can there be a better time to discuss resource control? Constitution amendments are a must. They are a big reason why we have the legislative arm of government. As time passes, new generations are born, and new conversations emerge. We must, as a people, be ready to move with the times. This is the only way to move forward.

“So, as you meet, I hope you can raise these thorny issues that have eluded those who came before you. You may not be able to resolve them, but you would at least acknowledge that there is an elephant in the room. This is an important first step”, he added.

‘Why Makinde Bought Nomination Forms For Us’