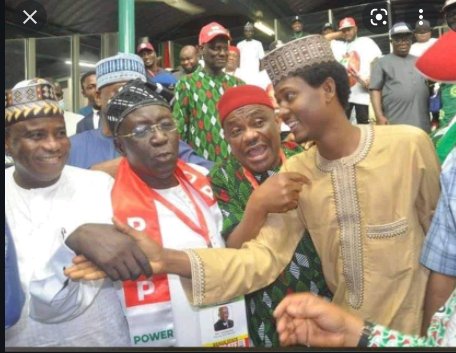 REVEALED: How 25-year Old Who Won PDP National Youth Leader Was Backed By A Camp Lead By A Top Politician

Many Nigerians can still remember how a 25-year old Muhammed Kadede Suleiman emerged winner of the post of Youth Leader for the main opposition party.

Suleiman took the shine at the national convention of the opposition Peoples Democratic Party, PDP, as he was the youngest candidate that won a top post. In fact, he is arguably the youngest person to ever occupy the top leadership position in PDP and any major political party in Nigeria in this recent time. That was why many PDP Governors, VIPs and other people made efforts to see him, have handshakes and take pictures with Suleiman. But, how did he emerge winner of that post? Did he do it on his own or was he heavily backed by strong forces?

Report discloses how he was backed

Suleiman might have appeared likable but likability did not do the magic for him. It was revealed that Suleiman was backed by a strong political camp headed by Senator Ahmed Makarfi of Kaduna State. A report by Daily Trust gave further details of how the camp rooted for Suleiman and sponsored him to get the backing of other major stakeholders including the PDP Governors to win the post.

Makarfi is a former Governor of Kaduna. He is also a former Senator. Moreover, Makarfi headed the PDP as an acting National Chairman when the court removed Senator Ali Modu-Sheriff. Makarfi led the party with the backing of relevant party leaders and PDP Governors. He was actively backed then by influential PDP Governors like Nyesom Wike of Rivers State, former Governor Ayodele Fayose of Ekiti State and others. It was Makarfi that organized the national convention that produced the now embattled PDP National Chairman of PDP, Prince Uche Secondus.

Based on his influence and achievements in PDP, Makarfi got the backing of PDP Governors and others who supported his candidate Suleiman to win the post against the person sponsored by former Vice President, Namadi Sambo. Sambo had backed Usman El-kudan. At the end of the contest at the convention, Suleiman who was backed by Makarfi polled 3,072 votes to beat El-Kudan who got 219 votes.

As it stands now, PDP Governors are seen as strong forces to reckon with in the party ahead of the 2023 general elections. Yet, Suleiman’s victory suggest that political godfathers still paly roles in helping younger politicians to win elections.

What are your thoughts on this article? Feel free to drop your comments.